Among the things that I would rather do than grade exams or write a paper, a retrospective on a football senior seems like a good way to build excitement for Northwestern's upcoming bowl game against Texas A&M. Picking one of this year's senior class to write about first was difficult, but I settled on Jeremy Ebert because of his particular brand of third down heroics (and it didn't hurt that I remembered the play I wanted to highlight).

Ebert had some big plays this year, but the thing that defines his game is the clutch reception to move the chains on third or fourth down. The fact that he keeps getting open in critical situations is a testament to the precision with which he runs his routes, and this play demonstrates that quality perfectly.

On the road in Lincoln, NU received the second half kickoff with a 7-3 lead but without Dan Persa. After a pair of Treyvon Green runs, NU faced a 3rd and 7 from their own 44. In a likely passing situation, NU brought Trevor Siemian into the game and lined up with five receivers: from left to right, Demetrius Fields, Drake Dunsmore, Kain Colter, Ebert, and Christian Jones. Nebraska's defensive alignment left the middle of the field wide open, with defenders lined up to protect the outside of the field from NU's receivers. 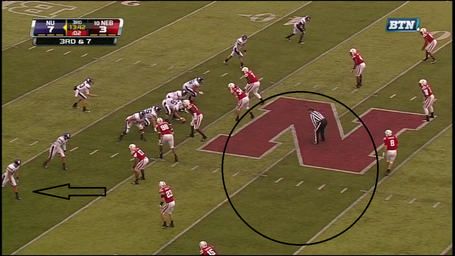 .Both Ebert and Colter release and begin heading for the middle of the field. 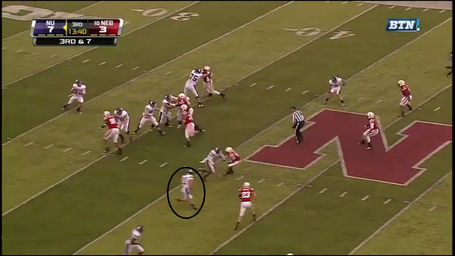 On the outside, Jones heads straight for the Nebraska DB. Colter's defender does a good job of keeping him from getting too far inside, but he heads up the seam anyways. Meanwhile, Nebraska's number 23 aggressively moves to clamp down on Ebert's inside break. 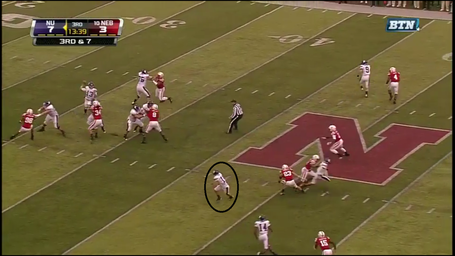 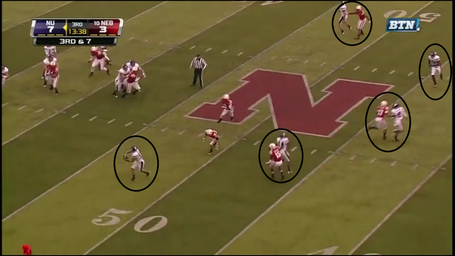 By the time the ball arrives, Ebert is all alone on the run. Nebraska has excellent coverage on the other four NU receivers (you can't really see it here, but there is a man running with Fields at the top right and another in the deep middle of the field), but Ebert's route and Siemian's well-timed throw combine to get the ball in a receiver's hands with no defender within five yards. Ebert accelerates down the sideline before being tracked down by the Nebraska deep safety for a gain of 32, setting up a Kain Colter touchdown run two plays later.

Plays like this one, converting an important third down to keep NU's hopes alive, are why Ebert led the team in receptions, receiving yards, receiving touchdowns, and yards per catch this year. The Iowa game epitomized this element of his game, as Ebert caught 13 passes for 107 yards. More impressively, Ebert was targeted on seven third downs and converted six of them. The Nebraska game, 6 catches for 147 and a touchdown against a good pass defense, probably still goes down as Ebert's best on the season, as he combined plays like this one with the stunning 81 yard touchdown that helped put the Huskers away.

As good as he has been in college, Ebert's chances at playing in the NFL don't seem great; what information I can find without subscribing to pay services has him well out of the draft, meaning any football future would have to come as a free agent. He isn't an imposing physical presence (listed at 6-0, 195 pounds). Instead, he gets open by combining above average athleticism with excellent technique. This year's demonstration of big play potential combined with the polished route running on display here might give him a chance if he chooses to pursue a football career.

Whatever his future, Ebert's career at Northwestern has been stellar, and he still has one more chance to impress against Texas A&M. If this year's seniors are going to end their careers with a win in Houston, Ebert will need to show up with his usual third down heroics.