Yes, the game before the Baylor game!

Northwestern is SWACcin' tonight, taking on the Mississippi Valley State Delta Devils - YUH! - in a thrilling non-conference showdown. This preview has the least to do with actual basketball of any preview ever, including

Normally I ask you who you think is going to win, but I'm going a little bit unconventional on this one. I'm gonna check the poll at 5 and that'll decide what I do for the evening.

Are they good?: According to Kenpom, MVSU is the best team in the country's worst conference. Right now, MVSU sits at 1-6, on account of a genuinely brutal non-conference schedule that is apparently par for the course for SWAC teams. MVSU will not play any non-conference home games, with two neutral court games against Cal Poly and Tennessee State being the team's sole games against teams not in power conferences. (The Double-D's went 1-1, beating Tennessee State in double OT.) Besides that, they've faced Notre Dame (loss), DePaul (loss), North Carolina (yeah, loss), South Carolina (only lost by four!) and Arkansas (loss), and after NU they'll turn around to play Ole Miss, Florida, Wisconsin, and Iowa State. It's the No. 11 SoS in the country, and suffice it to say, they're not good enough to win any of those games. They have the talent to play lesser major-conference teams close - South Carolina only won by four, DePaul by ten - but haven't showed they're good enough to actually win.

What are they good at?: That schedule pretty much ensures that all their Kenpom categories are horrific - their only defensive tint of green on the page is for the dubious opposing free throw percentage. They're very good at taking money from schools to lose road games.

What are they bad at?: Offense and defense.

Can we stop talking about basketball now?: Yeah, suggestions?

What is a Delta Devil?: A pixellated orange-and-green thing with a cape that can shoot fire out of its hands. It is unclear what makes the Delta Devil so suited to the lower Mississippi river area. 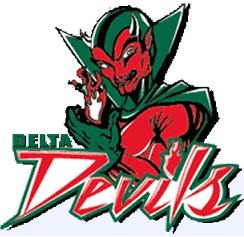 How many touchdowns would Jerry Rice score against NU's secondary?: Now? Probably one.

Difference between the amount of times MVSU has been in the NCAA Tournament and the amount of times NU has: Four. The Delta Devils have four SWAC titles to their name, but that has a nasty habit of setting you up to play the No. 1 seed in your bracket, as they've gone 0-4. Their most recent dance was in 2008, and it was quickly and brutally ended by a UCLA team featuring Kevin Love, Russell Westbrook, and Darren Collison. MVSU lost 70-29 - yup, 29. Love and Westbrook combined for 29 while the brilliantly named Stanford Speech shot 1-for-13 from the field, perhaps due to the fact that his ESPN player page indicates he might have been a little bit too young to play on the collegiate level. Speech did lead the team with two assists, though.

Great names?: Did you need to ask? Senior forwards Amos Sturdivant and Falando Jones - his name is the gerund form of the nonexistent verb "Falar" in Spanish - are merely warmups; the star here is clearly senior guard Cor-J Cox.

Not satisfied with people named Corey or corgis, which are adorable, Cor-J has just thrown a dash and a J on there. And it's awesome. He can also dunk.

How can NU win?: Play the game.