Anyway, Northwestern plays Ohio State, and the pain is painful. After suffering back spasms after beating Duke that kept him out in OSU's only loss against Kansas and hurting his foot against South Carolina, Jared Sullinger (WHISTLE)

That's a block on 35 purple, that'll be one-and-one for zero

What? I was just trying to write about Jared Sullinger - (WHISTLE)

I can't even write about him without getting called for a foul? And why am I number 35? Who am I? Chris Kaman? Brian Cardinal? Jud Buechler? (WHISTLE)

Technical foul on 35, purple, two shots and possession for red

Are they good?: In my opinion, Ohio State with Jared Sullinger (WHISTLE) is the best team in the country. They took Duke, a top ten team for sure, and absolutely dismantled them for their only loss of the year. They played it close against a very good Florida team and left with the W. They've embarrassed every other team they've played. Only in two games where Sully was hurt - Kansas and South Carolina - did they look beatable, and even then got the W over an awful Gamecocks squad on the strength of 30 from Deshaun Thomas and didn't look bad against Kansas.

What are they good at?:

The Buckeyes are become death, destroyer of worlds. They run a vicious man defense with Aaron Craft forcing lots of steals and Sully making sure no misses turn into offensive rebounds. (He has the best defensive rebounding % in the country.) The team never turns the ball over, and is virtually unstoppable inside.

What are they bad at?: The Buckeyes are not a spectacular shooting team. Aaron Craft hit 37 percent last year but is just 6-for-20 on the year this year and Deshaun Thomas is a chucker amongst chuckers. William Buford is connecting at 37.3 percent from downtown, but the team overall shoots just 32.9 percent and counts on the long ball for just under 20 percent of their total offense. They also don't force a lot of blocks, which basically explains why they are so dominant on the defensive boards - Sullinger does a good enough job keeping guys from getting close looks that blocking shots is less important than blocks from help defenders.

How did Northwestern play the No. 1 team in the country to within one point over 80 minutes last year?: I have no clue. As you may remember, NU played Ohio State twice last year, and both times OSU had the best ranking in the country. The first matchup saw NU fight back from a ten-point deficit after a spate of missed OSU free throws to tie the game, only to see Sullinger make one-of-two from the line with under five seconds left for the 58-57 victory. The other came in the second round of the Big Ten tournament, as NU forced overtime but Sullinger took ten trips to the free throw line in the extra period and converted all ten times, turning a 2-of-12 shooting performance into 21 points and 18 rebounds and giving OSU the 67-61 win.

The general theory was the same: play slow. Very, very, slow. The 35-second shot clock of college basketball gives you a tremendous opportunity to control the tempo of the game, and when you're outmatched, it obviously plays in your favor to slow the game. Over time, things will regress to the norm and the better team will generally beat you. But if you limit the amount of opportunities the other team has, there's a higher chance you're able to get lucky. So why doesn't every team do this? Why doesn't USC-Upstate sucker punch Ohio State more regularly by slowing the game to a crawl? Well, it's not that simple. The other team is still a lot better than you. They'll force turnovers and push the ball in transition. However, NU plays an offense specifically designed to eat as much time as possible off the clock, and they're relatively skilled at it. Furthermore, it works well against OSU since much of their defensive prowess comes from Aaron Craft's ability to force turnovers from opposing point guards, while the PO doesn't require much PG ball-handling. NU ran their Princeton Offense to perfection, eating the clock and only committing 11 turnovers combined between the two games. The first game was a mere 49 possessions, the slowest game out of the literally thousands that took place in college basketball last year, according to Kenpom. The second game only had 52 possessions in regulation.

But that STILL doesn't explain it to me. Not only was this Northwestern, but it wasn't NU at full-strength: John Shurna was out for the first game, forcing Mike Capocci to play the game of his life, and Juice was in foul trouble in the second, seeing Nick Fruendt play the game of his. NU upsets are generally built on the back of preposterous shooting performances. Northwestern shot under 40 percent in each game and was a combined 16-for-51 from three in the two games, just under 33.3 percent. Each game saw one NU player go off - Juice Thompson was clutch at Welsh-Ryan and John Shurna had 23 in the BTT.

The slo-mo offense helped, but it took something else to actually make OSU not click offensively the way they generally do in the paint. It wasn't there against NU twice last year, and let's hope they dial it up again tomorrow.

Are you aware of the changes instituted before the 2010-11 season to Rule 10, Sec. 1 of the NCAA Men's Basketball Rulebook? The section pertaining to fouls? Yes.

Rule 10, Sec. 1, Art. 5: A player shall not use the forearm and hand to prevent an opponent from attacking the ball during a dribble or when trying for goal.

Rule 10, Sec. 1, Art. 6: A player shall not make jokes about or pertaining to the family members of Jared Sullinger. That is a foul.

Rule 10, Sec. 1. Art. 7: If a player is at karaoke with Jared Sullinger, he shall not sing "I'm Real" by Jennifer Lopez Feat. Ja Rule. That is his song, and singing it is a foul.

Rule 10, Sec. 1. Art. 8: A player shall not play against Jared Sullinger without properly deoderizing. Sullinger will be permitted to perform a "smell check" on opposing players, failure to comply will result in a foul and immediate ejection until proper precaution is taken. (Smelling Jared Sullinger is a foul)

Rule 10, Sec. 1, Art. 9: A player shall not spill Jared Sullinger's drink. This is a "party foul", which is actually just the same as a regular foul.

Rule 10, Sec. 1. Art. 10: If Jared Sullinger yells "PLEDGE" at a player, they have to do what he says, or else. ("Or else" is the referees calling a foul on you. The NCAA does not endorse hazing by non-referees.)

Rule 10, Sec. 1, Art. 12: At Jared Sullinger's request, opposing players must stand still like one of those guards at Buckingham Palace at any point in the game and Jared Sullinger can make funny faces at them until they move. If they move, foul.

Rule 10, Sec. 1, Art. 14: Before every game, all opposing players will be presented with this questionnaire: 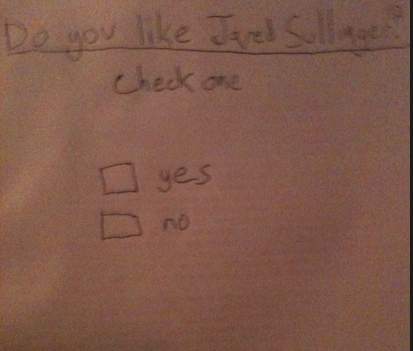 Checking no is a foul.

Rule 10, Sec. 1, Art. 15: A player may hold his or her hand(s) and arm(s) in front of his or her own face or body for protection and to absorb force from an imminent charge by an opponent.

Names?: I'm a big fan of freshman LaQuinton Ross, for several reasons. First off, "Quentin" is a name. It's a tough one to spell. Some people name their children "Quinton", but not many. One of these is terrible former NBA swingman Quinton Ross. LaQuinton Ross has the same name as that awful, awful former Memphis Grizzly, but with a "La" in front of it. If my name was "Quinton Ross", I would add things to it as well so as not to be associated with Quinton Ross. Also, I propose that we call him "The LaQuinton Inn" after the motel chain.

Can NU win?: I don't see it in the cards. Lightning struck twice last year to give NU two good shots at beating OSU, and they sadly came up short twice. But, my goodness, that's a great squad. NU will play molasses-ball once more, but probably won't keep OSU as offensively impotent as they were the first two times.