We move on to day two of our proceedings, and with the second day, we have two important points brought up:

1. Say, Northwestern's best hopes this year are of the NIT. If a never-been-to-the-tourney squad is up against a No. 1 seed (who if they lost would get an auto bid to the NIT and hurt NU's chances), shouldn't we root against them? Uhh, yeah. Should've thought of that. Screw you, Gardner-Webb.

2. Say, isn't it pretty dumb that we're rooting for other teams to make the tourney, thus making NU's company even less prestigious by slimming our ranks? People who ask this: HAVE YOU NO HEART? These teams are NU's cosmic brethren. And I will stand by them until the end, by which I mean us qualifying for a tournament, at which point, SCREW THEM. (But, in all honesty, you're right in theory, but I have a sick, twisted sense of humor when it comes to NU's no-tourney history.)

Am I the only person who cares about this? Probably. But it's my site, and I choose to launch us into full-on coverage.

High Point had a huge win yesterday over Liberty, putting them two games away from ditching us. They play again tomorrow vs. UNC-Asheville. Those tools.

Henceforth: we'll also be taking a look at our dearly departed squads as they peace out more in-depth.

Kennesaw State's chances today: .6 percent. (On Kenpom's own site, he is more generous and gives them a 1 percent chance.)

Some things Kennesaw State does not have going for them: They SUUUUUUUUCK. Things very, very, very quickly turned violently badly for the Owls after that game: they would go on to lose the next ten straight, including a 25-point loss to an Alabama State powerhouse and a 40-point loss to Iowa. They have the 341st worst defense in the country. Out of 345. THEY LOST IN DOUBLE OVERTIME TO SIU-EDWARDSVILLE. Yeah. SIU-Edwardsville. On the flip side, Belmont is REALLY REALLY GOOD. They have no quality wins on the year to prove it - just some close losses to Tennessee and Vandy, but absolutely tore through the A-Sun, including wins over Kennesaw State, 87-60 and, this Saturday, at Kennesaw State, won 88-41. Yeah, eighty-eight to forty-one. Don't hold your breath. The impressive thing is that Kennesaw State actually qualified for this conference tournament while other teams did not make it.

Reasons to irrationally hate Belmont: Hipsters like your el stop here in Chicago. And 88-41? That's not even nice. Be considerate. Jerks.

Something Army has going for them: Bucknell may be 13-1 and the No. 1 seed in the tournament. Of course, as always, that one loss came to last-place Army. And it wasn't just a regular loss: Army crushed the Bison 90-70, crushing a generally disciplined defense - they wouldn't allow more than 77 in any other game all season long. Also, they could get some F-16's to come bomb the hell out of Bucknell if they lose.

Some things Army does not have going for them: This game is on the road, and, uh, Bucknell's 13-0 record in their other, uh, 13 conference games.

Reasons to irrationally hate Bucknell: Buck those guys. Who tries to beat the Army? Oh, I know who, TERRORISTS. Also, Chris from "The Wire" apparently went there according to the Wikipedia, and he killed a lot of people in cold blood on TV. Also, they're terrorists. Jerks.

Something Tennessee-Martin has going for them: They have a player named Benzor, who I'm pretty sure is either a mythical creature, medicine or forgotten element on the periodic table, quite possibly a very dangerous one. They also nearly beat Tennessee State earlier in the year, falling 67-64. A victory here isn't completely unattainable - Tennessee State's 225 kenpom ranking should indicate that.

Some things Tennessee-Martin does not have going for them: This Martin guy sounds like a tool, first of all. Secondly, of their 11 wins, TEN came against teams with a kenpom ranking of 279 or worse, the odd one out being a victory against Eastern Kentucky (219). Also, the tournament is in Nashville, where Tennessee State is located. I see your evil scheme of having a million schools in Tennessee but only one of them being a home team, OVC, and I'm not impressed.

Reasons to irrationally hate Tennessee State: Easy: they nearly beat Northwestern last year and there's no reason any of us should have forgiven them yet. Luckily, we had (and still have for one more game) Juice Thompson. Jerks.

Now, a look at our two fallen brethren:

Felled by: Coastal Carolina, first round, 83-72

Why they will be missed: Hyphens, sweet hyphens, the Runnin' Bulldogs ran directly into our hearts. They did both Gardner and Webb proud.

Great moments in Gardner-Webb basketball history: As pointed out yesterday in the comments, GDub - who I will not refer to as "GW" to avoid confusion with George Washington is most famous in basketball for upsetting Kentucky in 2007 and putting an early dark cloud over the Billy Gillispie era at UK. They're also known for a 2002 scandal where the president of the school removed an F from his star player's transcript just a few years before the transition to DI. I give them an A for effort. 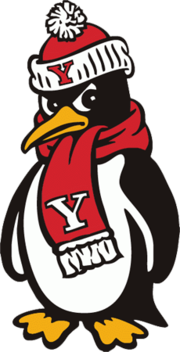 Why they will be missed: For having the cutest little mascot possible. LOOKATHIMHE'SSOCUTEOHMYGOODNESS.

an accurate depiction of penguin life in the wild

Also, a quick search reveals YSU's athletic site refers to their team as both the "Pens" (understandable, like the hockey team) and "Guins" (WHAT?) colloquially. Which, much like penguins, is adorable.