Here's vol. 1 of my reader-requested offseason forays into hip-hop blogging.

This isn't so much a hip-hop treatise, in that I hope my hip-hop treatises are informative, interesting posts that make you think about why rap music is interesting, and where I think that I'm actually good at writing even though I'm, you know, not.

This, this is a post making fun of someone who has been made fun of a lot, often without him knowing. Not because he deserves it, but because his videos are the only thing on the internet able to consistently make me laugh out loud for their entirety two or three times through. Very few things I read online even get me to physically chuckle. Not this. I crack up.

In December of 2009 - finals week of my first quarter as a blogger - I posted a series of videos by a rapper named Bangs. Bangs is a Sudanese - err, South Sudanese, my b, Wikipedia - teenager who emigrated from his wartorn homeland to move to Australia. Somewhere along the line, he heard American rap music that was on the top of the charts in his formative years. He cites Chingy as his favorite rapper, yes, Chingy. A lot of it. And as far as I can tell, this American rap music was his entire exposure to the English language. And hearing this music, he decided he would someday be a rapper, and began making videos in front of a green screen to songs he made on his computer.

To give him credit, his songs are catchy. Extremely catchy. Like, they'll be stuck in your head for months.

Bangs struggles to piece together rhyming sentences, grammatically correct phrases, and loads every line with rap slang he possibly doesn't understand, all while standing in front of a green screen backdrop of things rappers like to stand in front of in music videos. In that post in 2009, I wrote this:

Someday, probably in the heart of the offseason, I plan on writing a 10-15 page essay on everything that is absurdly strange and hilarious about this video. For now, merely enjoy the fact that it's a video of someone who may or may not know that rapping contains "rhyming" in front of a green screen with pictures of money, Sudan, and a forest, often with three or four of him simultaneously on screen.

Well, a year and a half later, I have a promise to keep.

Since we last met Bangs, a lot has changed. He was in a commercial for Honda in Australia (in which he packs all the objects seen in the background of his music video into a Honda Jazz, from popcorn to a green screen to a roulette wheel, then raps things like "special girl, the Honda Yazz is for you, it is bigger as my love heart is for you").

As he's developed a cult following, he's been able to make higher quality music videos and perform concerts. However, the quality of his English and beats are, well, exactly the same. This is a breakdown to the video of one of his more recent songs, "Hi Haters", not to be confused with the song "Hi Hater" by Maino, which, is, like, the same name of a song.

And please, watch the video first before reading my analysis. It's much funnier.

0:03: "Hi hater. How you doing. Long time no see. Ha-ha. Yeahhhhhh." First of all, I'm concerned as to the amount of haters. In the title of the song, it's mentioned that there are multiple haters, now Bangs only has one hater. As for pre-rap song intros, this is quite possibly the worst of all time - it's just him being very cordial to his hater.

0:12-0:32: Wait, pause the video for a second. Wait for that truck to stop backing up. Wait, what happened to the truck backing up when you paused the video? Nevermind, start it THIS TRUCK BACKING UP IS REALLY INTERFERING WITH MY ENJOYMENT OF THE SONG HIT PAUSE AGAIN wait, it's gone. Oh. Hold up. Wait. Wait wait wait wait wait. You're telling me that somewhere in the production process, Bangs decided the best thing to do was play a continuous deafening high-pitched noise for 20 consecutive seconds during the chorus that does not alter in pitch, frequency, and has no rhythm, for 20 straight seconds as if it will enhance our experience of the song? Indeed. Every chorus is accompanied by a high pitched electronic "BEEEEEEEEEEEEEEEEEEEEP" as if we're watching a TV edit of The Departed on CW11. The first time I watched this video I could not believe that this was happening and rewatched the chorus about eight times while laughing hysterically.

0:12: We find out in the chorus that somebody is heating on Bangs, and that the more they heat on him, the more he does his thing. This makes sense - much as cold-blooded creatures require heat to gain energy, Bangs uses heat as fuel to do his thing.

0:33: Bangs just says the lines of his chorus and hopes that we don't notice it.

0:36: Apparently his thing is "getting money like a paper." Either Bangs completely misunderstands the slang that money is "paper" or he is bragging about how wealthy he is by comparing his monetary income to that of the lucrative newspaper industry. He demonstrates the point by counting bright red money, that is either the currency of Australia or he bought some red construction paper before the video shoot.

1:18: HE HAS A T-SHIRT THAT SAYS "UR BOY BANGS". He subtly reminds us of the time in the last verse when he told us not to hate on him when we see him with other chicks by saying "once again, don't hate on me when you see me with other chicks." He also notes that these chicks might get under his friend.

1:37: This is the sixth time - two per chorus, two in verses - that Bangs has pointed out that the more heaters heat on him, the more he does his thing. I'm starting to sense a directly proportional correlation here. I've made a line graph - a rap graph, if you will to demonstrate this. 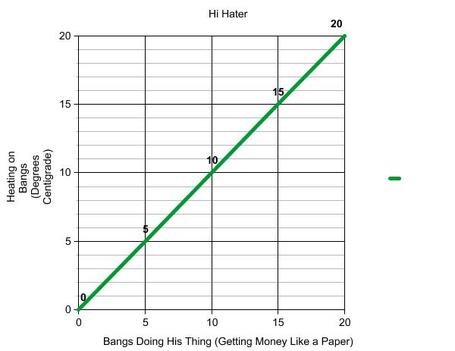 2:03: The guy, apparently, is Bangs' friend Ezu. If all of Bangs' knowledge of the English language comes from a few hip-hop songs he heard on the radio, Ezu's exposure to English probably comes from listening to Bangs without the benefit of the added exposure to hip-hop. To save you some time, I have counted every rhyme in Ezu's 30-second long verse:

That's it. Carry on.

2:08: "I will take you from here to Sudan." This is the most frightening threat I have ever heard in 21 years of listening to rap music.

2:13: "Information on reality." Wait, did I just step into like a Talib Kweli verse or something? Is this about to get really deep and intriguing? "You can't run, I'm the king of V.I.C." Oh, guess not. The people of V.I.C. can rest easy at night knowing their king makes no sense.

Just explore the rest of Bangs' work. It's magical.