There has been quite some coverage of Northwestern's very own Alex Marcotullio and his escapades for the Great Britain U-20 Basketball team. However, after the UK's easy victory in which they doubled up Romania, Macarthur31 reminded me via twitter that Northwestern recruit Alex Olah hails from that great former Communist nation.

Sure enough, I did some snooping, and Olah - going by the name "Alexandru", but you can't fool me - is also repping his country, in the European U-18 tournament's B division.

Marcotullio's time with the Brits is officially over, but Olah's is just beginning. How both those fools are doing - after the jump!

First off, I have a gripe with those punk-ass punks at FIBA Europe and their silly dumb competition system, which I will express by describing in great detail the British team's path to 13th place: as you can see, the purpose of the system is to find the top two teams out of the 22 teams in the B Division. First, there are four groups, then, the top two teams in each group are put in two more groups of four. Then the top two from those two play a semifinals, and the winners of that advance. If you're not in the top two, you're put in a classification group that will place you between ninth and 22nd place.

The UK lost their first two games by a combined seven points, falling late to Portugal and then failing to tie Finland. They then went on to win their next seven games in convincing fashion. However, this earned them a measly 13th place finish. Their two early losses knocked them out of contention for the top spot in the group - the Czech Republic and Portugal each went 4-1. In the classification group, they went undefeated, downing Israel and Iceland. However, they were in the same group as Finland, and their earlier loss to Finland somehow counted against them in the second group. Finland and Iceland advanced on point differential. Marco was sent to the 13th-16th playoff, which they won, cementing their status as the 13th best team in the B division of European U20 basketball. This is dumb and I think the guy who invented it is dumb.

Second off: this photo of Alex Marcotullio which I'm hoping nobody yells at me for using: 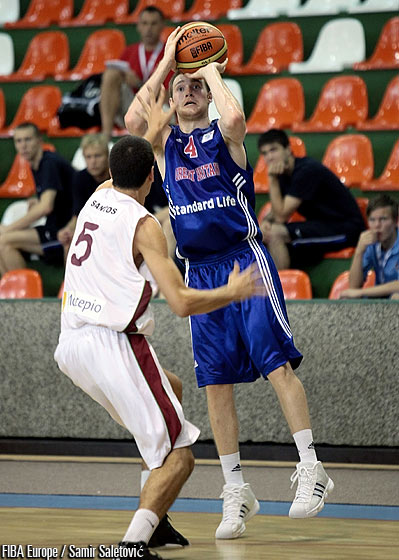 I'm sure he drained this jimmy over Portugal, but I'm a little bit worried that Alex Marcootullio has evolved into one of those Greek drama masks. I've never seen anybody more concerned about a jumpshot before.

Third, let's answer some questions from the beginning of the tournament:

1. With Juice gone, will the Brits let us see if Marcotullio can run the point?: Not really. He averaged 2.4 assists per game and was clearly not the point guard over Devin Von Oostrum.

2. Can he, like, do things besides shoot threes?: Over the tournament, he shot 67 two-pointers and free throws combined and 74 three pointers. He's a specialist on offense and that's not going to change over his final two years at NU.

3. But, he can like, shoot threes tho, right?: 39.2 percent from deeper than college three? Not bad by anybody's standards. In fact, it's better than he shot stateside. (He shot 39 percent last year in this tournament as well.) Marco dropped 16 a game including two 20+ performances when the UK's star, Spurs draft pick Ryan Richards, was out for the final two games. He had some grisly 3-for-11 and 2-for-11 outings, but made up for them with overall consistent shooting. He never dipped under 10 points. This is encouraging as all get out: although he won't be able to replace Juice Thompson's production as primary ballhandler, people will be needed to pick up the scoring slack, and long contested threes as an outlet on broken plays was, well, part of that scoring. Shurna hit a better percentage, but Marco is the team's best option as a spot-up shooter. He'll need to take more of a role in that department than in his first few years.

4. Can he grab offensive rebounds and hit game-winning hook shots? Sure. Eat it, my people's homeland of Israel.

5. Can le lead the team in rebounding? Oddly, yes, Marcotullio's 66 rebounds - 7.3 per game - was the most of any player on the British roster (in part due to Richards, a center, missing two games.) I mean, he had as many double-digit rebound games as he did games he got under five boards. We don't really see much of Marctullio as an rebounder at Northwestern: he brought down 2.5 a game last year, 1.1 as a freshman. Part of this is because he plays at the top of the key in the 1-3-1 defense, meaning a lot of sets he stays about 20 feet from the hoop. Perhaps this is because of the height of his opposition - Iceland, against whom he averaged 10 boards in two outings, only had one player over... two meters? What is that? But maybe he has a rebounding spark we don't know about.

So that's Marco's tournament. Sadly, his time with the U-20 team is over, as he's, um, 20. I twasked Mark of Shamsports.com - for those of you not familiar, its literally the most detailed NBA website in the world, and that's high praise from somebody literally obsessed with the NBA - as to Marcotullio's chances of making next year's Olympic squad. (Mark is British, by the way.)

We have plenty of bigs but amazingly few guards. Don't consider it likely, though.

He's right. While the British team has some nice big men - Richards, my boy Pops Mensah-Bonsu, and of course, Luol Deng at power forward - they're basically banking on Ben Gordon playing for them, not necessarily guaranteed, for any success at guard. They're guaranteed a spot in the Olympic tournament, and, well, Marcotullio might be the best pure shooter they have as a country. (Von Oostrum, the other point, shot only 19 percent from deep.) As Mark said, it's a long shot, but, well, we can hope. Let's get the #marco3llio4London2012 hashtag war started.

Now on to Romania and a specific Romania, Alexandru "Olah Hovito" Olah.

Again, let's start with some rambling on the nature of Romanian basketball. They employ Craig Moore, if that means anything to you, and American's leading scorer Vlad Moldoveanu - Moldy, as I call him -  who dropped 21 on Northwestern, is from there. More importantly, last year, their U-18 team played in the same competition Olah is playing in this year, and went 0-7. That's seven games, zero wins, seven losses.

This year, through three games, Olah is averaging 36.5 minutes per game - a high for players in the tourney - and is averaging 15.3 points, 13 rebounds, and 2.7 blocked shots per game. The team is 2-1 with wins over the Netherlands and Austria.

Am I implying that should Northwestern go 0-18 in conference this year, an Olah led 2012-2013 team should go 18-0? No, in fact, here's a billion grains of salt: competition in the Big Ten is unsurprisingly higher than competition in the European U-18 Division B circuit, furthermore, Olah is 6-foot-11 and playing against Europe's second-finest basketball players under the age of 18. He's the tallest player in his preliminary group and playing in America, probably has more experience going up against dudes his size.

Of course, there's a downside: young Alexandru has 12 turnovers to two assists, and apparently shoots a 50 percent clip from the free throw line.

Still. Even in two games, even against the pre-superpower-gleaning Monstars from Space Jam, 15 points and 13 rebounds are nothing to scoff at. Look. I'm not scoffing at it. In fact, I'm yelling DAYYYUUMMMMMMM. Say what you will about the level of competition, but Olah is straight up crushing it. He's pretty much better than anybody he's going to encounter in the tournament, and there's no way that's a bad sign.

(Thing you may be wondering: how come I'm covering low-level international competition but rarely touch on recruits on football and basketball teams in-season? Well, I'd like to. If you know about Illinois high school sports, please gimme a holler.)