Hey, errbody, this is futureposted - right now I'm on my way to Miami without computer visiting my Jewish-Cuban fam. The site is in good hands - Loretta and Herman - but remember that in times like these more than ever, you're welcome to throw up fanposts over on the side, and most of the time, I'll put it up on the front page as soon as I see it so we all can yell at each other about it.

If you're in the other group, you're dead to me.

Who dun it last year?: Replacing Brad Smith and Brian Phillips was a tall task. On one side, Brian Peters was arguably the most consistent player on NU's defense, leading the team in tackles as running back after running back found his way into the secondary. On the other side, injuries and inconsistency saw Jared Carpenter and Hunter Bates split time before David Arnold took over.

Were they good?: The safeties had their work cut out for them as the nine guys in front didn't provide much help. Peters certainly was. I was also a Hunter Bates fan in his limited play, although some of that had to do with his punt returning ability. Carpenter didn't seem cut out for the job, had some costly penalties and didn't stand out. Arnold, once he came back from injury, seemed every bit as competent as he was as a linebacker in 2009. Not to single out Carpenter, but this unit seemed very good for the most part - long story short, NU's defense could have been much worse had the last line of defense not been up to the gig.

yeah he had a leg injury but he's climbing back up the depth chart. 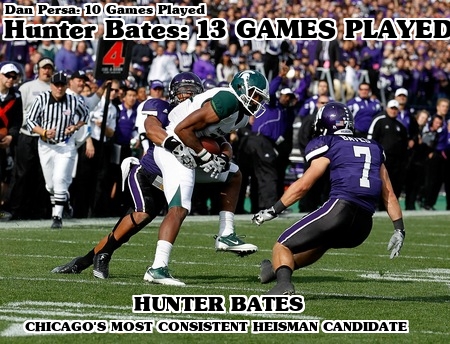 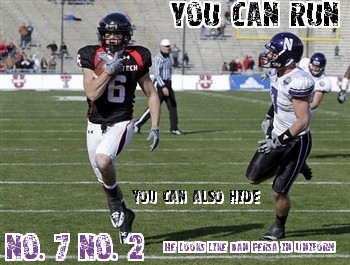 Who's got next?: Peters holds down his spot on one side - and deservedly so - while the other spot was David Arnold's to lose and he didn't lose it. Past that, there's maaaad confusion. As noted earlier, Jared Carpenter has completely fallen off the depth chart while Bates, recovering from a broken leg in the TicketCity Bowl, also has been out of work and will have to fight his way back into their rotation. Taking their spots are Ibraheim Campbell, a freshman who has had oodles of good things said about him, and Mike Bolden, a senior who has been a reserve cornerback thus far in his career and is looking to see his most time ever as a backup safety. I'd expect Bates to work his way back into the mix, Carpenter, I'm not so sure.

Is that an improvement?: Like I said: excitement for Campbell runs rampant. I expect to see him eke out a role and look good at it. Peters and Arnold are each very talented players in their senior seasons - to be honest, I expect this group of safeties to be as good, in a different way as the aforementioned Smith and Phillips - less likely to deliver game-changing hits, but also less likely to give up game-changing big plays by getting burnt or missing tackles.

1. Find a role for Bates: Yeah, I poke fun, but he's only shown upside. A bum leg is a setback, but let it be just that. However, he's gotten squeezed by a pair of talented seniors and an upcoming freshman at safety, and he's clearly the lesser of two punt returners compared to Venric Mark. But he should see the field. Also, it confuses the hell out of everybody which is fun.

2. Truck stick: Some picks floated into Brian Peters' hands, but the way a safety can change a game is by enforcing. Peters has the awareness to get to the ball, but remembering the difference the dudes I mentioned above a bunch of times made my freshman year - when NU had a legit good defense - by laying absolute wood makes me wish NU had anybody who could do it.

3. Help out!: There's no reason Brian Peters should lead the team in tackles. The real onus lies on the linebackers in front of him - sure, Peters plays up, but most of the time, he's getting stats because nobody else is - to make sure running backs are going down within seven yards of the line of scrimmage.