Share All sharing options for: The Purple Court Manifesto

(Alternate title: "The Revolution WILL Be Televised, But It Might Look Like a Deep Blue Instead Of A Purple On TV, They're Going to Take That Into Account Though")

This may be diguised as a mildly democratic poll on Facebook to gauge fan interest before NU Athletics decides what color to paint its new floor, but it's not. It's a revolution. A revolution against the monotony of sanely colored floors, hoping to bring us off into the wild purple yonder.

Though 30 NBA teams and 344 Division-I basketball teams aren't ready, Northwestern is. Right now, there is a nearly neck-and-neck battle between some bland regularly-colored court option and PURPLE COURT. We want to make a final push to put purple court over the top before NU sports makes their decision in the upcoming weeks. But even if we can't, I think this should stand as an argument for purple court: NU sports said fan feedback/popularity was one factor, but even if we don't win - and let's be real, we have to win - it's still the smart move for NU to go with purple court. After all, nobody has written a "Regular Court Manifesto", and I think that speaks to the revolutionary necessity of our campaign.

So this is our revolution. My family has a bit of experience dealing with revolutions and I've seen where you can go right and where you can go wrong, so, this is our manifesto, my second post on this in a week and my first since I realized how important this is. To help guide us through it, I've brought in our good friend and longtime contributor Guy Who Asks Pointed, Leading Questions in Boldface Type For Preview Posts.

Think back to when you were a kid. What did you imagine the year 2011 would be like? Flying cars? Leaving stuff around the house with no worries because that annoying robot from the Jetsons cleans it up after you? Pills containing all your food for the day? These, and probably differently-colored basketball courts, too. Well, you were off on a few, instead, we invented a system of super-fast computers that have reframed the global infrastructure but mainly let people watch porn. But not all hope for your vision of a bright new future is lost. We can still make work on the differently-colored basketball courts thing. After decades of conforming, this is our opportunity to go all in on the "we somehow think purple is cool" front.

Also: it will catch a lot of attention.

Why is this our job?

...Northwestern is hoping that cooler heads will prevail upon arrival. This is where internet comes in. Northwestern must either play basketball on a court made entirely of purple, or they must abandon the facade of democracy.

Quoth Eamonn Brennan over at ESPN:

It's a scary thing, democracy. All it takes is a few hilarious college kids...

OOOH! OOOH! I'm in college! I think I'm hilarious! THIS IS MY BANNER. THIS IS MY TIME.

You're not that funny. Boldface question-asking guy is the comedic force that drives this site and you know it.

One day I'm going to beat you with a stick.

How do you know this will catch a lot of attention?

It already has, appearing on ESPN, shouted out by Kevin Blackistone on Around the Horn and online, the Tribune, the Sun-Times, a bunch of other papers around the country, just on my first search I found results from Vegas and Oregon, Yahoo, SB Nation - word - and others.

But isn't a lot of that attention negative?

Sure, some of it is. The adage that "no press is bad press" is false in college sports, but that's because many programs - USC, Ohio State - have no place to go but down. For NU, despite play on the field, we're in quite the quite the opposite predicament, just hoping somebody knows we're here.

But, point is, people aren't going to like this. Sure, it has a lot of votes, but isn't the fact that a lot of people are saying "DO ANYTHING BUT THE PURPLE COURT" scary?

I believe it was Bangs who once said "hi hater. The more that I do my thing, the more you hate on me." People resist change. Every meaningful invention or change ever has been met with public outcry? Even in Evanston, we find people who told us playing a game in Wrigley was a terrible idea that would never work.

Did that paragraph initially contain a comparison between outcry surrounding the purple court and people who campaigned against the civil rights movement?

Yes, and I took it out because it was stupid, but, it should be noted that if you don't like purple court, you're possibly racist.

Yeah, but that's besides the point. If anybody points out how ugly the court is in a discussion, point out that THEY are ugly, then high-five a third-grader, who should be laughing hysterically

Do you have any notable supporters?

WOW... better not be that purple one.

Can you give us any data that this will make NU more successful at basketball?

I can give you data that says that if you use tournament appearances as a mark of success... we might as well try something new.

Okay, you've made your case: how do I support purple court?

First off, if you haven't like the picture of the purple court on Facebook and write something on the NU Athletics FB page like "OPTION 3 SON". If you already have done that, do it again and see if they notice. Having rigged the ballot, just continuously make a raucous about purple court. Talk to your friends, family members, and even people you don't like that much about purple court. Tag your tweets in twitter with #purplecourt. Reach out for better celebrity endorsers than Drew Crawford, who is a backstabber. But just in general live with the spirit of purple court. Know that when the revolution succeeds, we'll remember you.

Yes. Inspired by Alex Marcotullio typoing "Welch-Ryan Arena" on twitter yesterday and somebody mentioning that the court "looks like some kid threw up after drinking too much grape soda", I realized that we have a perfect sponsor: Welch's. Welch's, as you probably know, is a company that seems to have a lot of grapes, and produces the preferred pre-sex soft drink of the Notorious B.I.G. I think it's time to kick Welsh to the curb, regardless of how much money Pat Ryan gave the school to name a building after his parents-in-law. (Of course, the "Ryan", which commemorates the playing career of recently-graduated forward Jeff Ryan, will remain forever.) So I got in touch with the people at Welch's and in return for a deal where they provide nutritious, healthy refreshment for NU student-athletes both such as coolers of delicious Welch's 100% Natural Concord Grape Juice® for timeouts, NU will put down a modestly-adjusted floor design. 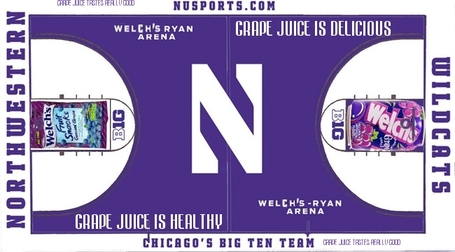 As you can see, there are some subtle changes that I think really benefit both parties. You think a bunch of students swinging their arms is distracting? Try shooting a free throw when all you can think about is the naturally delicious zingy flavoring of a pack of Welch's Fruit Snacks® staring back at you! Try setting up a last-second play when the entire conversation in the huddle is "how can something so nutritious taste so good?" These are the differences between a one-point loss to Ohio State and a one-point win, also, grapes have been shown to fight off heart disease. Welch's will also provide the student section with bunches of orchard-fresh freshly picked grapes to hurl at opposing players on their way to the locker room.

Nothing. I just think that this is a real win-win that can help put NU sports on the map. Other schools have sponsors. I mean, I transferred my life savings from TCF to Chase once I found out that Minnesota football played in TCF Bank Stadium, why can't we get in on that type of action? Just remember: It's not a real PB&J unless it's made with Welch's Grape Jelly.

K. Full disclosure: I think I should also point out that this campaign has also been sponsored by the American Association of Ophthalmologists, in hopes that NU's court drives up retina damage.

Yeah, in the long-term. But are any of us really going to want to see stuff when we're older? Think about it while listening to your enhanced bass Beats By Dre's that really let you hear all the audio quality of "E.T." by Katy Perry featuring Kanye West with no later-life sensory repercussions.

Now bring it home with a summary.

Can I have jokes in it?

Nah, son, be real for just a second.

Ok, for real: NU Athletics has done a great job with marketing this summer, #persastrong and all. Now they're giving us an opportunity to make our voices heard as fans. Who knows whether they actually intend to paint a court purple? Let's make it clear that this will be awesome. This gives NU a chance to do something unique. It gives an awesome point of school spirit. It could give us a distinct homefield advantage. You think it's ugly now. We thought Smurfturf was ugly five years ago. I thought purple court was ugly three days ago.

The point is, you get used to it. You just have to make a leap of faith and climb on board with the revolution. You just spent 1600 words reading this post. Now let's sip on purple and bring the ruckus and give us the ugliest, purple-pridiest court imaginable. PURPLE COURT.