(ed. note: More work from MountainTiger that I didn't have the effort to do.)

Northwestern dominated the game against Eastern Illinois, but the 'Cats allowed two big plays: Kenny Whittaker's 72 yard TD reception and Jimmy Lera's 76 yard run to set up another touchdown.  Since Lera's run came deep in garbage time against backups and, more importantly, I don't have video of it, we are going to look at Whittaker's touchdown to see where NU's defense went wrong.

Its first and ten from the NU 28, and EIU trails 14-0 having just got the ball back from a missed field goal.  Here we have the presnap alignment.  EIU is in the pistol with trips right and a tight end left.  I don't know what personnel NU has on the field, but their alignment is unremarkable: Jordan Mabin is in his left cornerback position to the trips side playing off (you can see his head and feet peeking out from behind the BTN graphic at the top left), while a Northwestern linebacker (or maybe nickelback) is inside the middle receiver and another linebacker is shaded into the alley.  Right cornerback Jerahvin Matthews is the NU defender at the bottom of the image, while the safeties are somewhere out of frame. 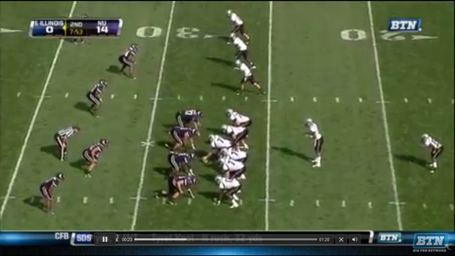 At the snap, EIU quarterback Jimmy Garoppolo fakes to the running back heading right and then rolls to his left.  The offensive line and tight end completely wash the NU defensive line out of the play.  The rest of the NU defense appears to drop into zone coverage, while the middle receiver releases inside and then heads upfield in the wake of the inside receiver. 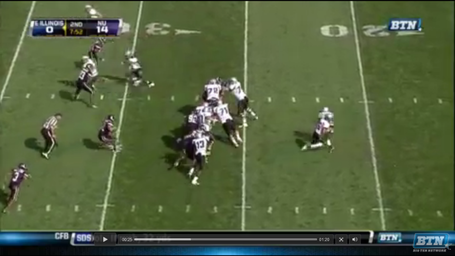 As the two inside receivers leave the TV view, the trailing receiver cuts horizontally across the field behind the undercoverage.  Then the camera follows the ball on its long, majestic arc straight into the waiting arms of Kenny Whittaker, who is running all alone downfield. 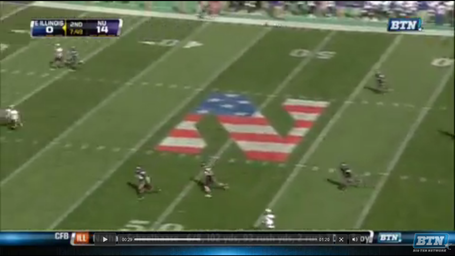 This picture gives a good idea of how badly things went wrong.  Based on where the receivers end up, I think that EIU ran a double post with the inside and outside receivers while the middle receiver ran a deep crossing route.  As I wrote earlier, I think that NU is in some sort of zone coverage.  If this is the case, one of the defenders below the 'N' on the field was responsible for a deep zone and instead got caught trying to shut down the crossing route.  In any case, EIU's play design created the opportunity by giving NU's deep defenders two opportunities to take themselves out of position.  First, the play fake encourages the defense to think run, and then the crossing route puts a receiver right in front of the deep defenders.  This is why its hard to be a DB: if you take the bait once on a play like this, you've given up a quick 6 that makes your entire team look silly.

But I promised you two passes, and a play from the BC game shows NU's secondary refusing to take the bait on a deep pass.  This play came on another first and ten in the second quarter, though BC had already picked up a couple of first downs on this drive.  BC comes out in a similar formation: one back with three receiving threats to the right side of the formation.  In this case, however, the inside receiver to the trips side is a tight end and the quarterback is under center.  Still, NU responds similarly: the RCB moves towards the formation and a linebacker steps out into the alley while the safeties stay deep. 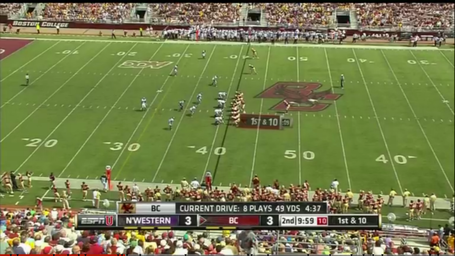 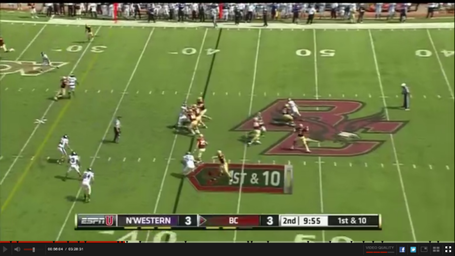 The outside receiver looks open for the big play off of his wheel route and Retting puts the ball up for him.  By now, you have probably figured out what comes next. 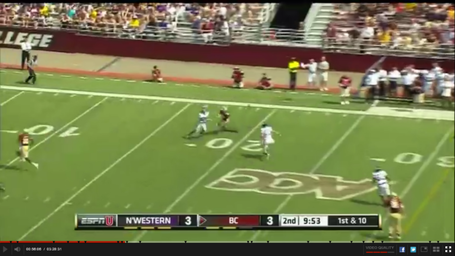 Mabin knows that the inside receiver is headed deep and is able to hand off the outside man, locate the ball, and make the interception.  What Rettig thought was a perfectly executed big play turned into a turnover because Mabin understood what the offense was trying to do and what his role in the defense was.  More importantly, he was able to do all this while sprinting downfield with a receiver and then locate and intercept the pass.

These plays show two different ways that offenses can use a formation with a notable passing strength to try to create a big play off play action.  EIU lined up their receivers to the right in order to attack the deep left, while BC lined up right to attack right.  EIU put a deep zone player in a bind with a vertical stretch by the deep post and deep cross, while BC used the post and wheel to create a horizontal stretch.  Though the two plays couldn't be more different in their results, they demonstrate the diverse threats that defenses have to be prepared for.