Mike Kafka is a lothario with a knack for stealing an unsuspecting and confused world's hearts. Though he didn't quarterback the Philadelphia Eagles to victory last night - in fact, the team blew a ten point lead after he came in the game - but the former Northwestern quarterback played valiantly and made the Northwestern sports universe explode after an injury to Michael Vick forced him out of the Eagles' Sunday night showdown with the Atlanta Falcons.

It seems petty to write about something so mildly important. Last week, Michigan fans probably barely noticed when Tom Brady and Chad Henne - both Michigan men and starters in the NFL - combined for about a million yards passing on Monday Night Football, and it probably looks petty for us to be so hype about something so minor.

But Kafka's outing wasn't just nine passes. It was pretty much every Northwestern football event over the past two years bursting together on national TV in beautiful yet sadistic fashion. In a few minutes, I went from a casual NFL fan to wanting to find Jeremy Maclin and cause him mental or physical harm.

I was watching Sunday's game with the same level of aggressive disinterest that Sunday Night Football merits for a casual NFL fan. I will watch the Jets every week, but, well, other than that, I keep half an eye on the flatscreen while flipping between my two fantasy leagues and trashtalking whichever teams' fans are in the TV room at any given point. It's the same level of indifference with which I assume many a groggy American observed Northwestern's performance in the 2010 Outback Bowl - crippled by hangover twelve hours after the clock struck midnight on New Years', hoping for warmth in the dull tones of some announcer discussing plays while lying in bed. This American slowly sobered up as the meaningless bowl game turned into the craziest batch of nonsense in recent memory, two teams living and dying and somehow not noticing that everything happening was alarmingly improbable.

I had no intentions of watching the end of the Eagles-Falcons game. I was supposed to walk over to my friend's house at 9:30. The game was mildly intriguing as I had two fantasy running backs going, but not worth not drinking for. Michael Vick is always super-enjoyable to watch and he was passing crisply and had the Eagles up, but was taking a beating. Twice he fumbled the ball, others, he delivered strikes while getting drilled. Personally, I was enjoying the "find Mike Kafka standing on the sidelines next to Mike Vick when they show him talking to his coach" game.

Then Vick got hit awkwardly while getting tackled and took a teammate's helmet to the head. He was down on the field.

Thoughts: oh, he's hurt. That sucks. I love Vick. Kafka's only one player away! Wait. Wasn't Vince Young hurt? Is he still hurt? Why is the camera panning to HOLY CRAP THE CAMERA IS PANNING TO MIKE KAFKA WHAT'S GOING ON. I immediately realized I couldn't leave my house until the situation was resolved.

My only regret is that I can show you only a small sample of what my twitter timeline looked like at the moment it became clear Mike Kafka would come in at quarterback for the Eagles. 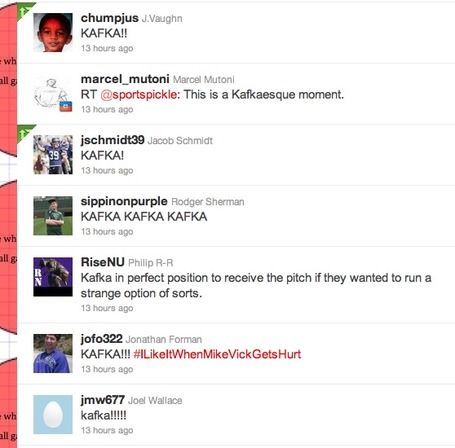 Northwestern's NFL players are few and far between - ten after roster cuts - and despite straight-up competent quarterback play in recent years, NU grads at quarterback, the most noteworthy position on the field, are even fewer and farther between. Brett Basanez threw 11 passes for the Carolina Panthers in 2006 and then spent two years not playing for the Panthers before not playing for the Bears. And before that, well, you'd have to go ages.

Yet here Kafka was. Obviously, his first drive featured handoffs and a short, ugly pass to Lesean McCoy that McCoy promptly fumbled, leading me to immediately think it was Kafka's fault even though it clearly wasn't. Whoever calls plays for the Eagles wasn't giving Kafka much of a chance to show off. Mainly handoffs. A few screens. But the point was, he kept completing them. Although his first drive sputtered when bubble screens didn't take the Eagles past the sticks, it wasn't Kafka's fault by any means.

Slowly, it became clear we weren't the only people intrigued of the #kafkastrong occurences. 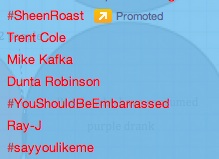 (Full disclosure: this was taken just now from the Philadelphia trending section. However, Kafka was trending worldwide for some time last night.)

Most of these were Kafkaesque jokes about how Mike Kafka's name is Mike Kafka. They were generally unoriginal, although one was particularly unbelievably brilliant:

@freemaneric: The only real Kafka joke to make right now involves the last lines of THE TRIAL. I like Vick so I'm not mentioning them.

(If you're familiar with the last lines of The Trial, you should yell "OOOOOOOOOH" right now.

Kafka's Eagles gave up two straight touchdowns, meaning he needed a game-winning drive in his NFL debut. The short stuff was still working. Then, after run after run after run, a play action and Kafka stood back in the pocket, clearly prepared to go deep. For a few seconds, the entire world froze as my brain tried to decide whether this would turn out to be comically bad or Kafka had become the Eagles' savior.

It was a strike to Jeremy Maclin. We were officially in "it's time for us all to say that Mike Kafka is playing well" time by the announcers, with references to the whole Outback Bowl and Northwestern and everything else.

Eventually, Kafka was 7-for-7 but needed a completion on fourth-and-four. He threw a perfect slant to Maclin. If you don't remember Jeremy Maclin, guess what, I do. Maclin was a wide receiver for Missouri when NU faced them in 2008. Stefan Demos screwed up a punt and Maclin was more than happy to return it for a touchdown. He then proceeded to catch Missouri's game-winning touchdown in overtime. To summarize, the man who slang damn near 80 passes in a magnum opus attempt at giving Northwestern a bowl victory against Auburn needed the guy who daggered Northwestern the year before in preventing them from winning a bowl game.

You can take the player out of the Northwestern Wildcats, but you can't take the tragicomic tendency for futility out of the player. To say Jeremy Maclin has cemented his spot on the wall of players Sippin' on Purple utterly despises is to put it lightly. Maclin had 170-plus yards receiving, but the critical catch fell harmlessly to the Georgia Dome turf.

Kafka had a last chance at a hail mary, but, well, you get it.

Vick might be out with a concussion next week, and if he is, Kafka's on deck to start again. To be honest, he looked really comfortable, and really good, despite pressure. There was even a glimpse at ol' Crazy Legs Kafka as he tried to scramble one time. He's obviously a step back from Mike Vick, and the fact that Philly made their playcalling a lot more conservative when he entered meant that although he did everything asked of him, he was still less effective than Vick was. But still, Philly is damn confident in him and they appear to have reason.

And you know damn well there will be a live thread here for it. As long as a de-purpled bald Kafka continues to spread far the fame in the pros, we'll be here supporting him.