Share All sharing options for: Frat Fitzgerald, Head Coach of the Northwestern Wildfrats

Like many readers of the site, I am a fraternal gentleman. This means that I am a member of an organization of gentlemen dedicated to striving for excellence while upholding the traditions, principles, and ideals that thousands before me have stood for.

It also means I sometimes get dumb shirts.

Last week I received a call from a person at CustomInk. I had just placed an order for a batch of shirts. I won't post them on the site lest I get into legal trouble, but long story short, they have seven words on them: FRAT FITZGERALD, picture of Pat Fitzgerald, HEAD COACH OF THE NORTHWESTERN WILDFRATS.

I am so happy.

The person talking to me was more concerned than I've ever heard any person in my life before. He told me that he had looked at licensing laws and had found out that "Northwestern" was licensed and that I needed the school's permission to make the shirts. Would it be possible to make the shirt that just said "Head Coach of the Wildfrats" instead of "Head Coach of the Northwestern Wildfrats?"

Yes, I said. He went on to tell me that I was using a very low-resolution picture. Would he mind if the Customink team of artists redesigned the image I used to appear better on the shirt rather than using the original image for free? Yes, I said. Customink is totally the best.

Unlike many head coaches - I mean, just look at Derek Dooley - Pat Fitzgerald is not fratty. He seems like a straight-edged individual, devoted to making sure his program remains strictly within NCAA boundaries. While OSU is on double secret probation, Miami is pretty clearly Delt, and the other 117 NCAA schools scramble to throw beer into closets when the NCAA is doing rounds, Northwestern remains steadfast in never doing anything wrong.

However, I feel like Pat Fitzgerald's often unwarranted intensity and sideline raging make him FaF. Furthermore, being in a fraternity isn't all about fratting, it's also about that thing I said earlier: dedication to striving to be the best and accepting nothing less than that from your brothers, and if that doesn't define Pat Fitzgerald, I don't know what does. We salute you, Frat Fitzgerald, head coach of the Northwestern Wildfrats.

For those wondering: these shirts are NOT FOR SALE. I made them for me and 12 of my friends. I totally can't sell shirts with someone's likeness on them without paying them. I'm not fully sure you can legally make shirts with someone's likeness on them anyway, but nobody has stopped me yet, plus, some other group of people apparently made shirts that say "FITZ IS THE TITZ" with the exact same photo (I didn't know about this til after I placed my order) but whatever.

I'm thinking about wearing mine to his weekly press conference next week, but I think he'd strangle me to death. Also, I was going to have it say

on the back, but I thought that was too much. Actually, my initial design was this: 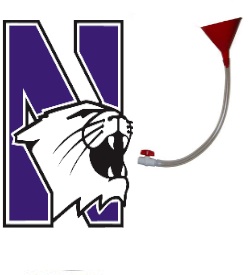 but I decided against it.