Saturday mornings are never a good time to write basketball preview, but, welp, here we are. I blame Tubby Smith and his proficience in the field of tubbiness for this debacle. (NOTE: Spellcheck has a problem with the word "proficience", which is a real word, but not with "tubbiness", which is an adjective meaning "being like Tubby Smith" that I made up 38 seconds ago. The more you know.)

Are they good?: Minnesota had all the look of a very good team, starting off 6-0. In the seventh game, Trevor Mbakwe tore his anterior cruciate ligament - ACL, as the kids call it these days - and the Golden Gophers lost to Dayton. They then started off Big Ten play by dropping four straight, although a rando win over Indiana and a thumping of Penn State make them look modest. Long story short, Trevor Mbakwe is irreverently talented, and any B1G team with him will be a lot better than any team without him. They are now a team without him and have been for much of the season, and it shows.

Has Maverick Ahanmisi lost that loving feeling?: Inconclusive, but to figure it out, watch this highlight reel of his play this season.

If you've seen Top Gun less than five times, consider yourself to not be my friend anymore.

Can you randomly post a picture of Jamal Abu Shamala playing for the Jordanian national team?: Yes. 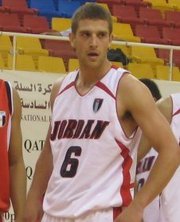 Can you provide any sort of actual basketball analysis about Minnesota?: To be honest, not really. Haven't seen any of their games this year, and their lineup without Mbakwe is a hodgepodge of guys who were role players last year, people who didn't play at all last year, and Ralph Sampson III. Sampson, still bitter about his grandfather, Ralph Sampson, harvesting his father, Ralph Sampson Jr.'s knees to prolong his NBA career (I MADE THIS UP), is a shotblocking stud, giving Minnesota some hot interior defense, but on offense the team is dependent on Rodney Williams, who so far as I can tell is not good at anything, and UC-Davis transfer/grape juice scion Julian Welch. It's not pretty, but it's a competent Big Ten team and I haven't really figured out how.

Can NU win?: The Barn is never a fun place for Northwestern - no wins there since 2007! - but I'm pretty genuinely not sold on Minnesota, in case you couldn't tell from the intense snark. Furthermore, I don't think Minny has the shooters to cut holes in Northwestern's 1-3-1 and don't think Ralph Sampson III is the big man to expose Davide Curletti IV and Luka Mirkovic XVII's defensive flaws. think this is a game NU has a fitty-fitty shot in, let's take it.