Share All sharing options for: The Horror, The Horror...

So, I went MIA before the bowl because of technical issues (apparently laptop cooling fans are important). Then the game happened and I didn't want to think about football for a couple weeks. Then the Packers got killed in the playoffs, and I really didn't want to think about football. So the moral of the story is, sometimes ambitious blog plans turn into a single post on Jeremy Ebert and a general feeling of bewilderment.

So, I'm sorry or you're welcome depending on which you prefer, but jump for a couple plays to put TAMU to rest.

The bowl game did not go well. First things first, though, I'm going to look at something that did go well.

Early in the second quarter, Northwestern lined up in a new formation. Colter is at quarterback with a tight end and receiver right and an h-back and two receivers left. TAMU struggles to get lined up right; eventually they end up with the line shifted to the offensive right, two defenders over the slot receiver, and a deep safety out of frame. At the snap, the nose tackle isn't in his stance yet. 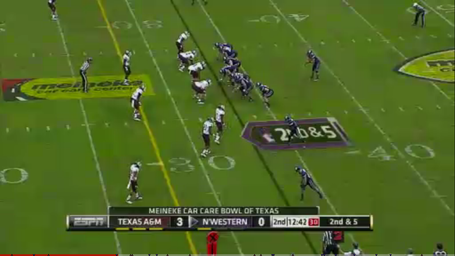 Colter gets the snap and the line blocks for inside zone to the right. 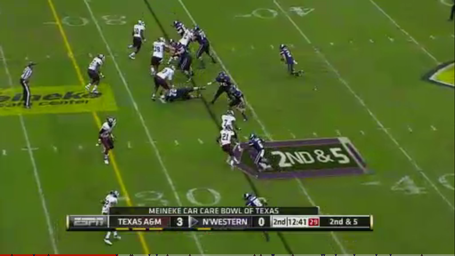 The blocking is fairly good. The nose gets double teamed, the right defensive end gets enough of a blocker at his feet to force him to back up and move down the line, and the perimeter players (LDE and LOLB) are effectively single blocked. Once the nose is under control, a blocker comes off him to finish the combo block on the RILB. On the backside, it looks like TAMU has a blitz on, as the inside linebacker looks to the receiver first while the defenders over the receiver head down the line. 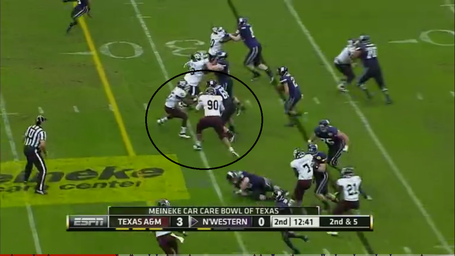 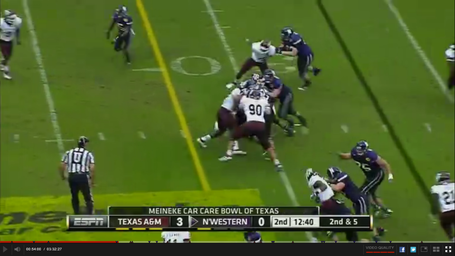 Even after contact, Colter and the linemen keep churning to get a couple more yards and the first down. This was not a flashy play, but 6 yard runs on 2nd and 5 are always welcome. In this case, the formation clearly confused the defense and helped NU get the edge. Even later in the game, however, TAMU got hurt by this incredibly simple run a few more times. Solid run blocking and hard running turned about the simplest play imaginable into a reliable gainer.

Unfortunately, while NU had decent run blocking, the pass blocking was horrific. In the second quarter, when it still seemed like things had some small chance of going well, NU got a first down off a Demetrius Fields reception. On first down, a bubble screen to Ebert got blown up. Then Persa got sacked on second down. Now NU faces 3rd and 19. Northwestern goes with an empty set. 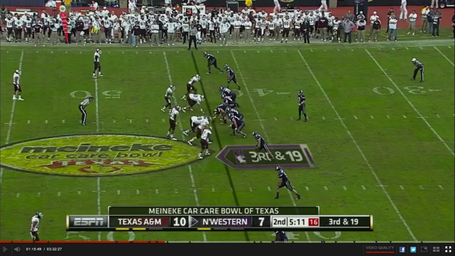 For those of you keeping track at home, TAMU has 7 players in position to blitz: two down linemen, three standing on the line flanking them, and two more on the heels of the linemen. NU doesn't motion a man into the backfield for additional protection; the offensive line will need to pick up the rushers on their own. 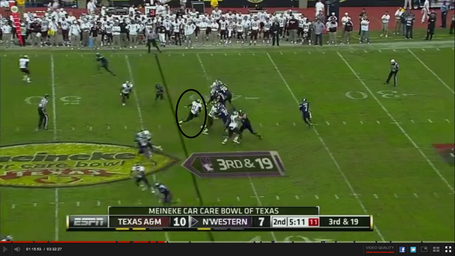 Only four players actually rush at the snap: the two down linemen and the inside linebackers behind them. This should be good news, as Northwestern has five men to protect. The linemen head outside to occupy the tackles and provide containment, while the linebackers cross as they blitz. The NU center goes to help the left guard with one linebacker, while the right guard goes to help the right tackle. This leaves a TAMU rusher free. 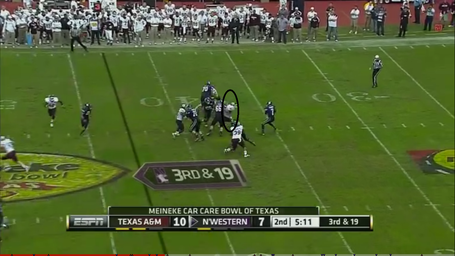 Unsurprisingly, this ends in disaster, with a rusher coming straight at Persa's face. Persa has no chance and takes the sack.

This play sums up my view of the problems for NU in the bowl game. For the first time since the Army game, NU's offensive gameplan seemed completely ineffective, and the biggest reason was a complete lack of effective pass protection. On a play like this, there is absolutely no reason why TAMU should get a free rusher. Northwestern simply failed to pick up a fairly simple stunt, killing any chance at picking up a difficult third down. When the opponent is willing to rush four and play coverage on third and long, you should at least be able to take a shot at converting.

That bowl performance provided a disappointing finish to a disappointing season. The recent news about Kyle Prater's transfer is heartening, but unless he gets a waiver from the NCAA he won't help next season. I am an optimist about the team next year, but that means that I think they should hit .500 with a normal amount of luck. The coaching staff has to manage both whatever fixes they think are possible on defense and replacing Dan Persa and the team's two leading receivers from last year. Hopefully, they also think about how to cut down on serious mistakes like this one.

On a happier note, Chris Brown recently gave NU some love. Much of the post is a re-post from a piece he wrote a couple of years ago, but it is worth checking out if you haven't already.