We only have a tiny peek at Northwestern's new basketball uniforms from Under Armour, as the company released NU's new jersey - alongside Texas Tech and Auburn's new looks - Wednesday morning. Here's what they look like: 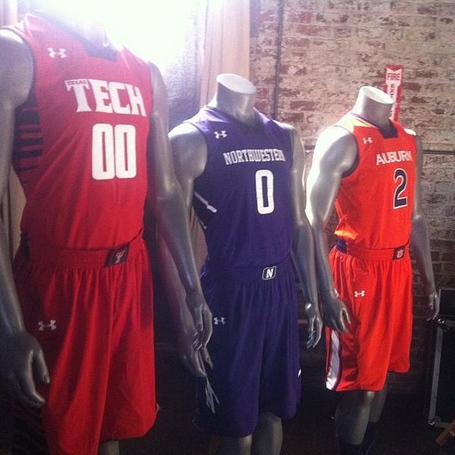 Other than that, it's pretty straight-forward. No crazy design, just a new font. Although that could be different when we see the back.

Under Armour's policy of putting school logo markings in deviant locations continues with the addition of a nice little groin "N", which fits really nicely with the big ol' butt "WILDCATS" along the back of Northwestern's football pants.

Also, props to Under Armour for prioritizing NU and making a big splash out of the new Northwestern football uniforms and then following up by revealing the new basketball uniforms in what appears to be a basement alongside Texas Tech and Auburn.

What are you guys' thoughts on the new uniforms?

Update: NU released a lot of new pictures on their website. The home jerseys are a little different, and in my opinion, much sharper than the road ones. The striping is a lot clearer and prettier, for sure.