Northwestern released its new basketball uniforms today. Here are a few pictures. Initial reaction: They're simple, but slick and much better than last year's. The stripe is subtle compared to the football uniforms, but it's a nice look overall. 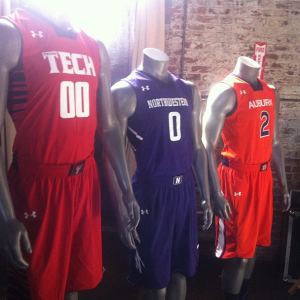 New Northwestern uniform, along with Texas Tech and Auburn (via Under Armour Basketball).