More on Northwestern's cat nap, Kain Colter and Venric Mark on some midseason all-American lists, and Jordan Mabin back in the NFL.

Nebraska tries its hand at satire: With Corn Nation's piece making fun of us for being nerds! LOL! Its sort of like jokes about how Nebraskans are obsessed with corn, the most delicious and versatile of all American crops. 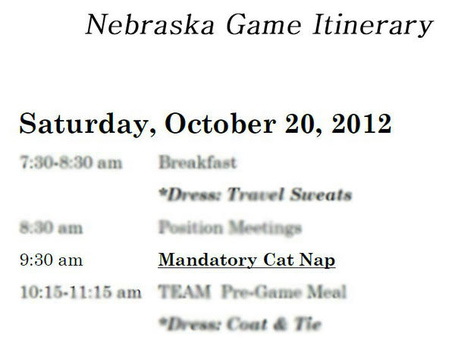 Seriously, playing for NU sounds enjoyable: Between all the eating and napping and sleeping and the defensive line nicknaming themselves "the fun train". That's the jauntiest, least frightening name for a defensive unit ever, but I'll take it.

Northwestern has all the purposes: Did you know all-American teams had an "All-Purpose" slot? I sorta didn't. But apparently they do! That's great news for Northwestern: Kain Colter made ESPN's first team midseason list for playing quarterback and running back and wide receiver, while Venric Mark made SI.com's list as a second-teamer for playing running back and being just about the best at returning punts.

YOUNG BUCK IN THE GAME: Northwestern's faux-Taylor Martinez is running back Stephen Buckley. Apparently his throwing motion is reminiscient of John Shurna's jumper.

B&C Enterprises: Kenny Bell and Kain Colter go all the way back to when they were best friends in elementary school and before, but now one plays for Nebraska and the other for Northwestern. A classic American tale about two men realizing they couldn't coexist, once friends, now bitter enemies, torn apart by business.