Plays of the Week: Busting the Scrape Exchange

Share All sharing options for: Plays of the Week: Busting the Scrape Exchange

This week, I will be doing things a little differently: instead of one post about several plays, I will have a few shorter (and hopefully more focused) posts.

The Northwestern offense didn't do much against Nebraska, but Venric Mark did bust out for an 80 yard touchdown run that was set up by a clever adjustment from offensive coordinator Mick McCall. To see what it was, we have to start in the first quarter, when Northwestern faced a 2nd and 2 at the Nebraska 6.

Northwestern comes out with trips left and a tight end right. Nebraska responds by showing man coverage over the receivers and packing the box with the other eight defenders. Kain Colter is the quarterback, with Venric Mark by his side. 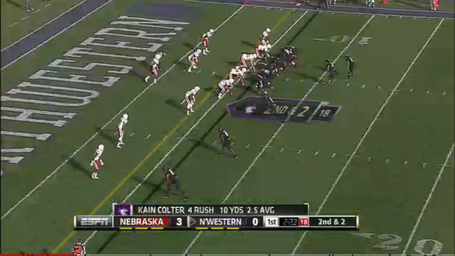 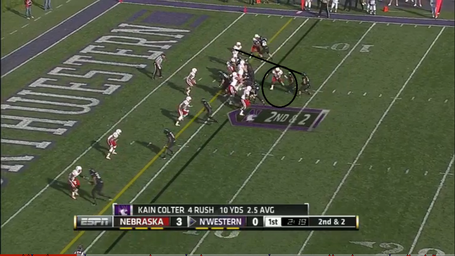 The circle is the defensive end accounting for Mark, while the line shows the linebacker filling Colter's lane. Colter tries to make a move, but the linebacker is able to make the tackle. 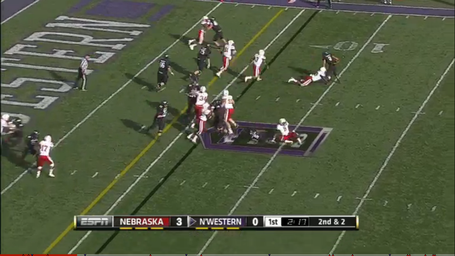 On this early play, Nebraska executed one of the basic counters to the zone read perfectly. By crashing the defensive end, the defense should be able to dictate where the ball goes. They are also able to get a linebacker on the quarterback, a much better matchup when trying to make a tackle in space. On a basic zone read play like this one, this scheme gives the defense a great chance at recording a TFL.

If the solution to the zone read were this simple, however, there wouldn't still be spread offenses. On Northwestern's first drive of the second half, Mick McCall pulled one of these out to great effect. This time, Northwestern lines up for a 2nd and 10 with Venric Mark to Kain Colter's right and Mike Trumpy to his left. Nebraska walks a safety into the box, presenting a seven man front. 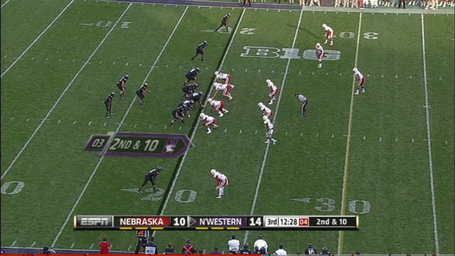 Adding a pitchman to the zone read is a classic answer to the problem of a scraping linebacker, as the quarterback gets the chance to play 2-on-1 in the open field. Northwestern does this, but McCall has another wrinkle up his sleeve, one which I have never seen before from Northwestern (though commenter Dr. NO mentioned it in the comments last week). 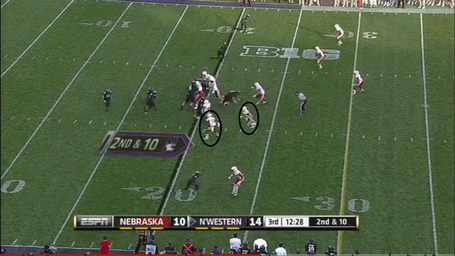 Nebraska solves the problem of the pitchman by having the safety account for Colter and scraping a linebacker over him to account for Trumpy on the pitch (the two circled defenders). Northwestern, however, is ahead of the game: instead of having Colter read the defensive end, right tackle Jack Konopka blocks the end and Colter reads the scraping safety. The safety is playing Colter all the way, the playside linebacker is hustling outside to take Trumpy, and center Brandon Vitabile is able to get a block on the backside linebacker. The result is a massive running lane for Venric Mark, who surprises the deep safety with his speed and takes the ball 80 yards for the score. 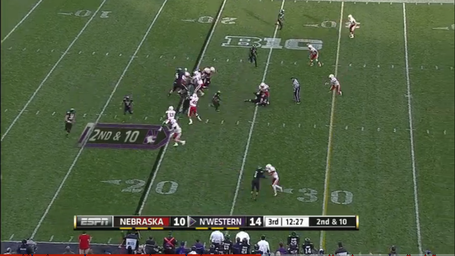 Northwestern gained a total of 301 yards against Nebraska. 80 of them came on this play. Venric Mark made the play a touchdown by being the fastest player on the field, but Mick McCall also deserves credit for springing him loose by figuring out the assignments Nebraska wanted to use in option defense and varying the blocking scheme to ensure the offense would get a free runner. This is a basic element of option offense that bodes well for the Northwestern running game going forward. Unfortunately, Northwestern didn't try to milk this advantage on Saturday, only lining up in the split backs formation a few times and never again running triple option out of it.

Starting tomorrow, we will take a look at how the defense broke down in the fourth quarter.