Plays of the Week Part 2: Nebraska Starts Coming Back

Share All sharing options for: Plays of the Week Part 2: Nebraska Starts Coming Back

When we last left off, Northwestern had just extended the lead to 11 off of Venric Mark's 80 yard run. After that run, Nebraska closed within 5 by taking advantage of a short field to score a touchdown, while Northwestern opened things back up with a 11 play, 52 yard touchdown drive to extend the lead to 12 with 8:31 to play. Up to this point, the Northwestern defense had been solid, holding the high-powered Nebraska offense to only 16 points and 397 yards. Nebraska's next two drives would add 13 points and 156 yards.

Starting with the ball on their own 20, Nebraska opened things up with a pair of Taylor Martinez runs bring up a first down. Then, things appeared to unravel. On first down, Martinez's pass was deflected into the air and nearly intercepted by David Nwabuisi. On second down, Ibraheim Campbell jumped a short sideline throw and again nearly intercepted the pass, bringing up 3rd and 10. Nebraska lines up in the shotgun with two receivers right and a tight end inside the other receiver on the left. Northwestern lines up with three safeties in the middle of the field and three down linemen. 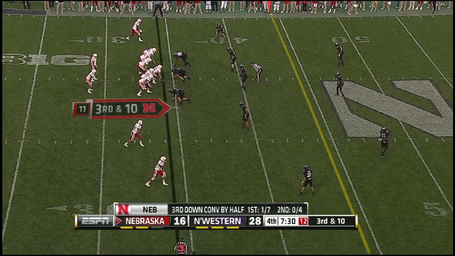 At the snap, the three safeties each take a deep third of the field while the five defenders underneath cover short zones and the three linemen rush. The linemen get no pressure at all. Nebraska's outside receivers curl five yards off the line, while the slot receiver and tight end head vertical. 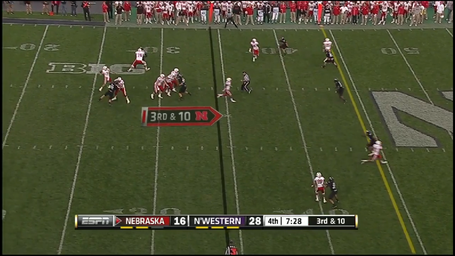 Once the clear the undercoverage, the inside receivers break outside on corner routes. This is a mirrored smash concept, an extremely common way of attacking the perimeter of the field. Northwestern's safeties have dropped off the face of the earth, so both corner routes are open. Martinez throws to his tight end, Kyler Reed, who adjusts to a slightly underthrown ball and makes the catch. The ball placement here is actually pretty good, as it keeps the ball away from the deep-dropping safeties and ensures that the pass doesn't sail out of bounds.

Two plays later, Nebraska lines up on first and 10 with two receivers right and a tight end to each side. Northwestern shows a base defense with generous cushions for the receivers. 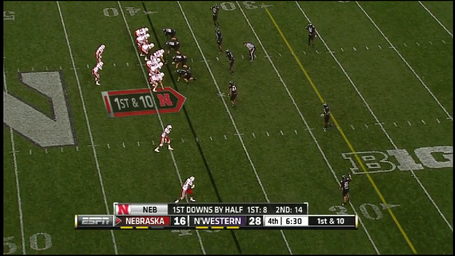 Nebraska is taking a shot all the way on this play. The line slides left while the right tight end and the running back stay in to block, presenting a seven man protection scheme. Northwestern sends only the four linemen, and Nebraska is easily able to handle them with the max protect scheme. Quincy Enunwa runs a post from the outside receiver position, while the inside man runs a deep crossing route and the tight end in the pattern runs a corner. The TV angle makes it hard to see, but the coverage looks like cover-3 with Traveon Henry as the deep safety. The receivers are fairly well covered, but Martinez sees a small window on Enunwa's route and throws the ball up. Enunwa has inside position on Quinn Evans, meaning that Henry needs to make a play to break the pass up. 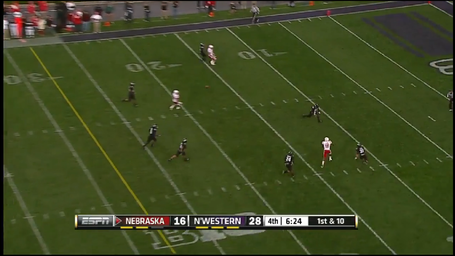 Henry takes a bad angle and manages neither a play on the ball nor a big hit on the receiver, delivering most of his hit to Evans. Two plays later, Daniel Jones gets beat on a fade to pull Nebraska within one score.

Northwestern's defense was not entirely hopeless on this drive, breaking up a pair of passes and forcing Martinez to check down several times. The pass rush was not very good, but when Nebraska wasn't in max-protect or getting the ball out immediately it was a factor. These two plays, however, were backbreakers. Enunwa's catch was simply a matter of execution; Martinez fit the ball into a tiny window and Enunwa did a great job to hold on. Henry could have made a play and didn't. This happens when you have true freshman playing important roles, and I still expect him to have a bright future at Northwestern.

The third down conversion, however, was also a schematic problem. By lining up three safeties in the deep middle of the field, Northwestern gave Martinez a clear pre-snap read. The three man rush has had some success this season, so I don't have much to complain about on that count. The deep drop from the safeties, however, opened a massive seam between the undercoverage and the deep coverage that once again made Martinez's job easy. With almost 8 minutes remaining in the game, the defense needs to be more concerned with getting off the field on third down than with guarding the deep ball at all costs.