Share All sharing options for: Plays of the Week Part 3: Nebraska's Finish

After Nebraska closed the game to 28-23, they got the ball back on their own 24 with 4:10 remaining in the game. The first touchdown drive featured Taylor Martinez making good decisions and accurate throws to pick the Northwestern defense apart. The second was more a result of the Nebraska receivers being completely uncovered.

On the first play of the drive, Nebraska lines up in a balanced 3-wide shotgun formation. Northwestern shows a safety and a half high; this is probably cover-4. 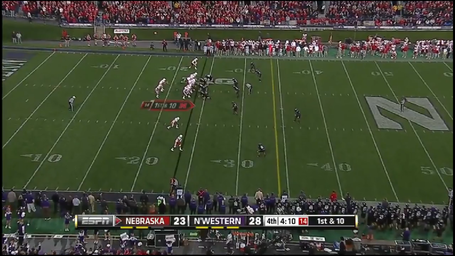 Nebraska sends Quincy Enunwa deep on a skinny post, and Taylor Martinez simply lofts the ball where his receiver can make a play. Daniel Jones doesn't come close to covering Enunwa; when the catch is made, Jones is falling away from the receiver. 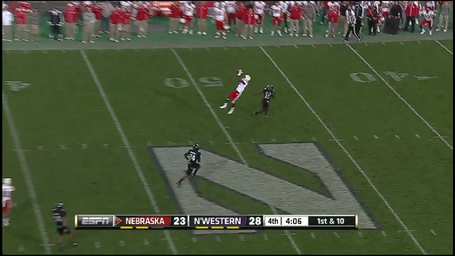 Fortunately for Northwestern, Enunwa falls down after making the catch; had he kept his feet, Nebraska might have gone ahead on this play. On the other side of the field, Quinn Evans has to leave the game after this play. In his absence, CJ Bryant enters the game. Nebraska's next series is a 2 yard run by Martinez, a 5 yard sideline throw on Bryant's side, and a blitz-beating sideline throw to the same side for a first down. Though the two passes go to Bryant's side, Nebraska isn't picking on him; Bryant is the deep coverage on both, and Martinez simply takes advantage of Northwestern's undercoverage being slow to take away the throw to the flat.

On first down, Nebraska again lines up in their balanced 3-wide shotgun formation. Northwestern has the safeties playing about 12 yards deep, with Bryant only five yards off the line and Jones 10 yards deep. 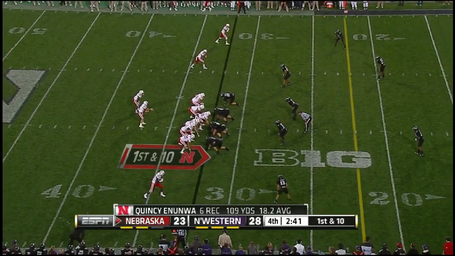 This play is a debacle. Sean McEvilly crosses the line early, meaning that the best possible outcome for Northwestern is 1st and 5. To add insult to injury, McEvilly is easily handled by the Nebraska offensive line anyways. The coverage is unclear; Bryant allows his receiver to pass him, which might mean he is playing underneath and might mean he is establishing trail position. My guess is that this is quarters again. 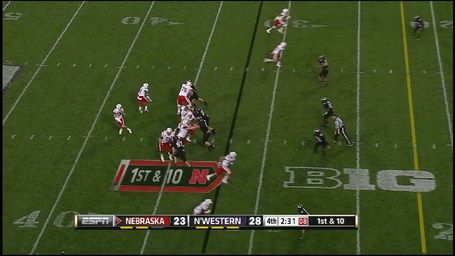 Jamal Turner runs a post from the slot receiver position. Martinez either likes what he sees from Turner or knows that he has a free play, simply lobbing the ball up for Turner. This time, Jared Carpenter is the victim. Once again, a Northwestern defensive back is reduced to being a spectator as a Nebraska receiver makes a play. 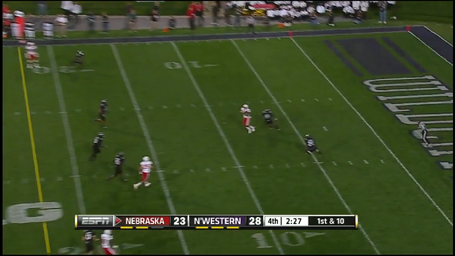 Carpenter comes up to make the tackle, forcing Nebraska to run another play. On that play, tight end Ben Cotton runs past Carpenter in the end zone, and Martinez throws a nice ball for the go-ahead score.

On the first drive of Nebraska's comeback, I mixed praise for Martinez with mild criticism of Northwestern's scheme. On this drive, I have to give credit to Nebraska's receivers. This drive covered 76 yards, 56 of which came when Nebraska's receivers let Martinez toss easy throws into the Northwestern defense. The flip side of this is Jones and Carpenter failing to squeeze the passing windows at all; if they at least hit the receivers while they are making the catch, maybe one of these plays ends in an incompletion.

These two plays show the severity of Northwestern's personnel weaknesses in the secondary. Things will be even thinner this week, as Quinn Evans and Nick VanHoose are both likely to miss Saturday's game against Iowa. The good news is that Iowa doesn't have a functional passing attack, and Northwestern's corners then have a bye week to recover before Northwestern's visit to Michigan. The bad news is that their loss stretches an already-thin secondary; even James Vandenberg may be able to get going against the depleted unit.