Plays of the Week: Going Deep

Share All sharing options for: Plays of the Week: Going Deep

Coming into Saturday's game against Iowa, Kain Colter had attempted only 15 passes in 4 conference games. That number is somewhat deceptive; it doesn't include scrambles, while it does include bubble screens and shovel passes that should be considered more a part of the running game than the passing game. Still, Colter's involvement in the passing game had mostly come as a receiver rather than as a quarterback. Against Iowa, Colter got the chance to run the offense almost the entire game. Northwestern's stellar rushing performance is worthy of praise, but he also produced good results in the passing game in spite of throwing his second interception of the season.

Colter's passing line (6-9, 80 yards, 1 TD, 1 INT) doesn't do full justice to his performance on passing plays. He was not sacked, and he scrambled effectively, notably picking up a 3rd and 5 and a 3rd and 9 on Northwestern's opening drive by taking off out of the pocket. Much of the passing game was built around short throws and scrambles. Colter only took two shots downfield, an interception and a 47 yard touchdown.

Northwestern led 7-3 when the offense got the ball for the second time. After a swing pass to Venric Mark opened the drive, Colter brings Northwestern to the line with split backs behind him and three receivers split wide. Iowa lines up in (stop me if you've heard this) a 4-3 with a cover-2 shell and a linebacker walked out on the slot receiver. Before the snap, the safety to the offense's right takes a step forward, possibly indicating that he has a responsibility in run support. 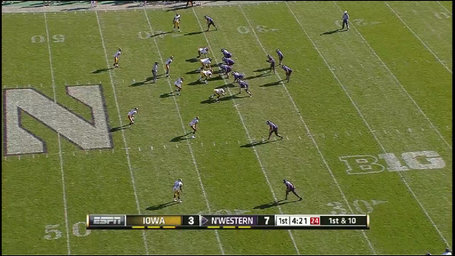 Colter fakes a handoff to Venric Mark, while Brandon Vitabile pulls in the other direction and Tyris Jones takes an initial step towards Mark. The action simulates one of Northwestern's rarer run plays, what I call the whirl option. The run, adapted from an old-school trap option play, is a counter to Northwestern's triple option play out of this formation; what makes it suitable for the play-action pass is the highly visible pulling center, who should convince the linebackers that they are seeing a run-blocking scheme developing. 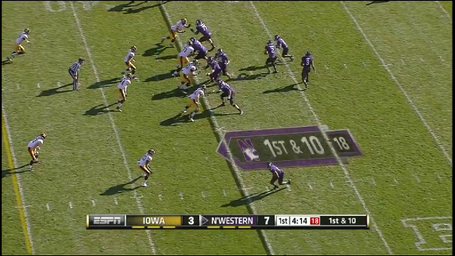 The Iowa safety to the right charges hard at the run action and the linebackers take initial steps to defend the run. Tyris Jones reverses field and heads left as he would on the run. Colter spins as if to follow him before setting up in the pocket. The Iowa defensive line is being handled by the Northwestern offensive line, and the fake has taken one of Iowa's safeties out of the picture. I'm not sure what the route combination is on the offense's left; the receivers switch on their release, and Christian Jones breaks out at about five yards. The outside receiver (I think it is Rashad Lawrence) pushes vertical before leaving the frame. 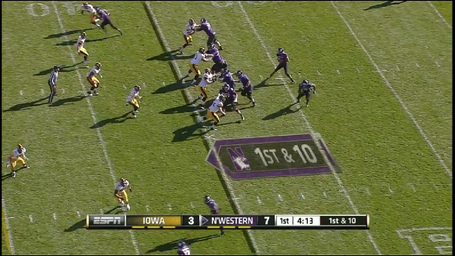 Tony Jones is one-on-one with the corner and has established inside position on a post route. Colter needs to get a bit of air under the throw to ensure that it gets over the Iowa undercoverage. Unfortunately, he is a bit overzealous on that count. 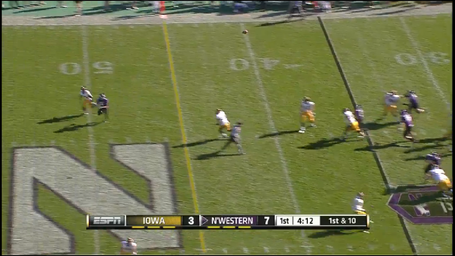 The ball floats over Jones and into the arms of the Iowa defensive back for an interception. Jones could have made a better adjustment to contest for the ball, but the ball was overthrown and behind him. That is a tough combination for a receiver to adjust to. Overall, this play was a schematic win: it got Northwestern's most dangerous deep threat one-on-one with a corner on first down. The problem was execution; either Jones or Colter could have made this a big gain with a better play. Iowa defensive back B.J. Lowery also deserves credit for adjusting to the ball and coming up with an interception.

Colter's next downfield shot came in the second half. Leading 21-3, Northwestern got the ball back from Iowa's second straight 3-and-out at the Northwestern 43. A pair of runs and a clutch third down pass to Demetrius Fields gave Northwestern a 1st and 10 from the Iowa 47. Northwestern comes out with trips right and a tight end left. Iowa walks a linebacker out over each of the inside receivers and puts a safety over the top. This isn't a very good alignment for defending anything, as it leaves the box undermanned and gives NU favorable matchups on the outside; I can see why so many Iowa fans are frustrated with their defensive scheme. 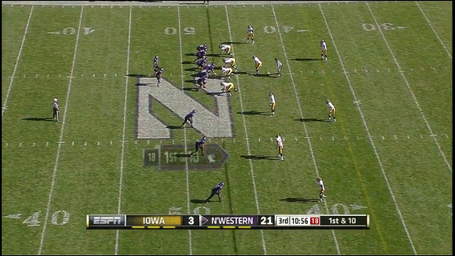 Once again, Colter fakes a run play; this time, it is the cutback play that shredded Indiana. The safety on the trips side doesn't look impressed, but several other defenders are frozen by the run action. 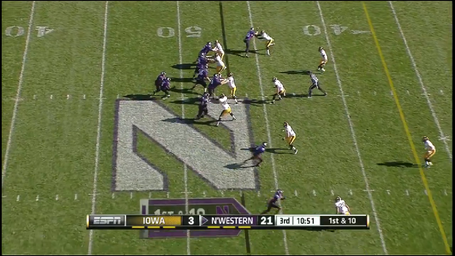 Northwestern is running 4-verticals, and Iowa is in trouble. The protection is good, and the seven defenders in this image mean that the receivers all have one-on-one matchups downfield. To make things worse, the circled defender is a safety; that means that a linebacker is trying to defend a wide receiver running vertical. 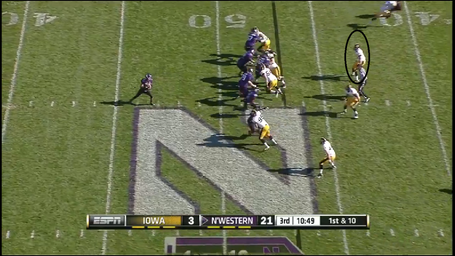 Colter sees that Christian Jones is matched up with the linebacker and releases the ball. 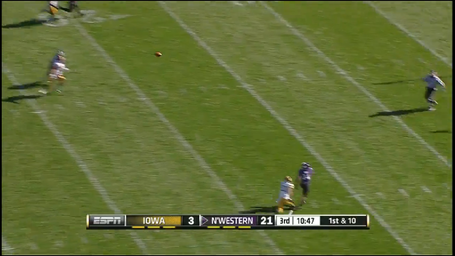 This is a great throw on a deep ball. Jones has to slow down a little bit to make the catch, but this means that he is guaranteed a chance at the ball. The defender is hard pressed to make a play on the ball, as he is desperately trying to keep up; this situation is where many defenders get called for pass interference by running straight through the receiver. In this case, Jones adjusts to the throw and makes the catch. The defender makes an attempt at a tackle, but he is off-balance and can only get a handful of jersey as Jones heads into the endzone.

With the running game working and the short passing game less effective than it has been in recent years, plays like these are what Northwestern needs out of the passing game. Both used a run fake that corresponds to a specific play to set up a favorable downfield matchup. The players need to execute these plays like the second one more often, but the idea is good and the talent is there.