Plays of the Week Part 2: A Colter Keeper

Share All sharing options for: Plays of the Week Part 2: A Colter Keeper

Yesterday, I looked at Kain Colter's downfield passes. Today, I want to look at a new element Northwestern added to the run game against Iowa: called QB runs.

Northwestern's opening drive had lasted 10 plays, including 4 Kain Colter runs, by the time Northwestern faced 3rd and 1 at the Iowa 5. To convert the third down, Kain Colter lines up with Tyris Jones to his right and Venric Mark to his left. Iowa puts a player over each of the three Northwestern receivers and lines up the other 8 defenders in a 4-4 front. 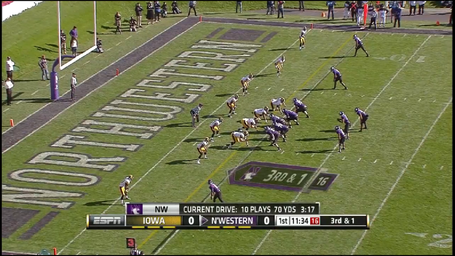 At the snap, Colter meshes with Tyris Jones. I think that this is a fake and not a read for a few reasons. First, I have no idea who Colter would be reading; there is no unblocked lineman, and I don't see a second level player who Colter is watching (the backside alley player is possible but unlikely). Second, the mesh is quick and loose; Jones doesn't ever have a grip on the ball. Finally, a read would mean that, on third and 1 in the red zone, Northwestern is seriously considering running Tyris Jones with Venric Mark as a lead blocker; no offense to either player, but that would be a seriously bizarre decision. 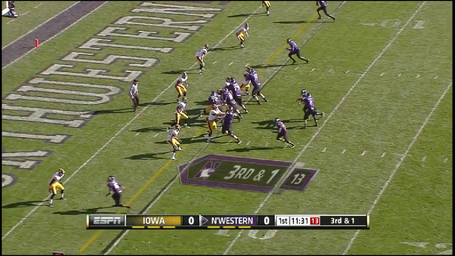 The Iowa defensive line holds up reasonably well, not giving any ground. Brian Mulroe does a good job on his block, helping get the nose tackle under control and then picking up the backside linebacker and driving him into the endzone. Jones gets the playside linebacker, and Mark takes the playside alley player. On the backside, Iowa has an interesting exchange, as the alley player moves to cover the slot receiver and the defender over the receiver moves towards the box in run support. Neither of these players was likely to be relevant in any case, but this exchange ensures that neither is in the play. Colter should be able to at least pick up the first down by cutting inside Mark's block. 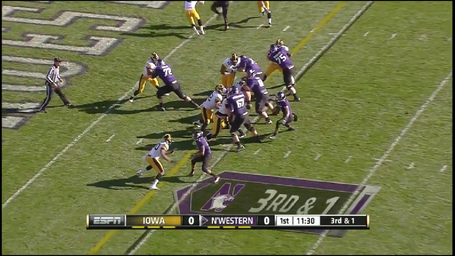 Colter sees the hole closing and a chance outside. He cuts behind Mark instead. The defender responsible for holding the edge loses his balance and ends up as the victim of a pancake block by a 175 pound halfback. Colter heads into the endzone untouched. 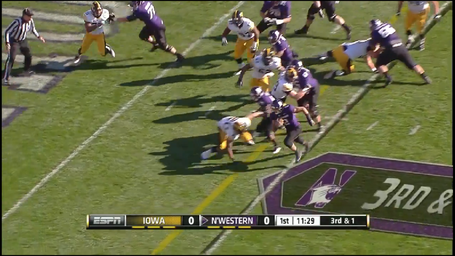 Northwestern has run a few designed QB keepers this year. Against Vanderbilt, Colter scored the finishing touchdown on a designed QB run, and NU ran QB draws a few times before the Iowa game. The Iowa game nevertheless marked the first time that I have seen a commitment to designed QB runs throughout the game and in all situations. These runs are a great way to give Colter chances to run without having to deal with the defense's attempts to muddy his reads. Against the Michigan and Michigan State defenses, Northwestern will need every trick Mick McCall has to find the end zone, so it is good to see new wrinkles still appearing in week 9.