Plays of the Week: 3rd Down Options

Share All sharing options for: Plays of the Week: 3rd Down Options

Michigan's turnaround in their first two years under Brady Hoke has been impressive; after Rich Rodriguez managed only one winning season in his three years in Ann Arbor, never winning more than 3 Big Ten games, Hoke took the Wolverines to a BCS bowl last year and has them in contention for the division this year. The biggest factor in the turnaround is the improvement of the defense; after allowing over 35 points and 450 yards per game in 2010, it allowed only 322 yards and 17.4 points per game last year. Coming into Saturday's game, Michigan was allowing even fewer yards and points this year.

Facing a formidable challenge, Mick McCall came up with a gameplan that featured one of Northwestern's less frequently used run plays, the speed option. The gameplan was likely dictated in part by personnel, as Michigan's interior defensive line has been solid this year; the speed option limits their chances to make a play and can tire them out with lateral movement. While personnel likely was a factor, there is also a schematic reason to attack Michigan with the speed option, as a critical third down play showed.

With 5:24 remaining in the third quarter and a 7 point lead, Northwestern comes to the line on 3rd and 8 with trips right and Mike Trumpy in the backfield next to Kain Colter. Michigan's defense is in an unorthodox look. They have 3 down linemen, with a linebacker standing up between an end and the tackle. Behind this, they have 2 linebackers in the box with safety Jordan Kovacs jumping in and out of the box. Everything here suggest a blitz, but Michigan's alignment makes it hard to figure out who will rush and who will drop. Pass protection against this kind of defense is a bit of a crapshoot; if the offense guesses wrong, they will end up with linemen blocking air while blitzers come untouched. 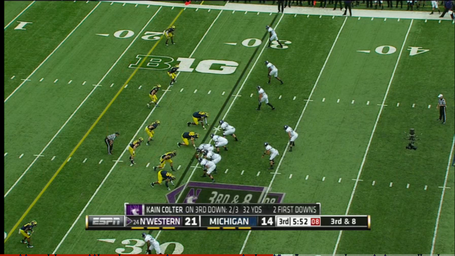 While Michigan is busy with all this presnap shifting, Northwestern checks to the sideline for a play. Instead of playing the defense's game and trying to pick up the blitz in pass protection, Mick McCall sends in the speed option. Colter takes the snap and heads right, reading the unblocked defensive end. Jake Ryan and Jordan Kovacs both blitz on the offensive right. 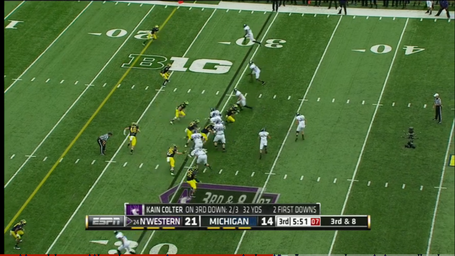 The end comes flying upfield to lay a hit on Colter, who gets the pitch out to Trumpy. 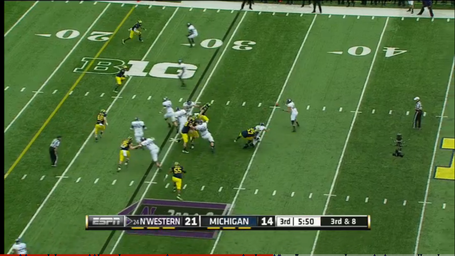 At this point, Northwestern is in good shape. The blitz has helped trap most of Michigan's defense inside, and the only two defenders wider than Trumpy are about to get receivers in their face. Kovacs rushes hard off the edge and is able to get upfield before Dan Vitale, lined up as the inside receiver in the trips, can block him, but this has drawn the Michigan safety well inside of the running lane. 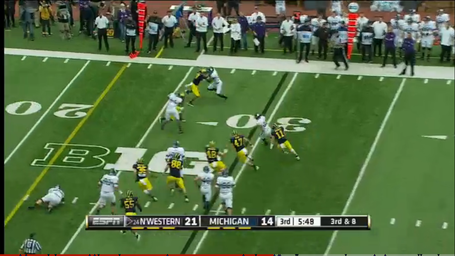 Kovacs isn't the only Michigan defender to have beaten a block. Jake Ryan blitzes on the offensive right and is barely touched by Neal Deiters, and Jack Konopka whiffs trying to cut off Desmond Morgan's pursuit from the backside. Patrick Ward can't quite get a block on Joe Bolden, and the backside end is unblocked by design. Because Trumpy has so much room outside, though, the only blocks that matter come from the receivers; Christian Jones and Rashad Lawrence both do a great job, opening a massive lane for Trumpy. Trumpy rumbles for 20 yards before going down at the 10.

Michigan's defense is designed like an NFL defense: they mostly use basic 4-3 concepts on early downs, but on third and long they will use unusual fronts and blitzes to break down pass protection schemes. If the offense is willing to drop straight back and try to make the first down with a pass, this is a great approach. Breaking out of the pro-style environment, however, can make this kind of defense much less effective. On this play, Northwestern was able to get a long gain without effectively blocking most of the defense because Michigan's aggression trapped the defense where the ball wasn't.