Plays of the Week: DOOM

The most depressing article I have ever written.

Share All sharing options for: Plays of the Week: DOOM

Two plays stand out from Northwestern's loss to Michigan: the 53 yard pass to set up Michigan's tying field goal, and the failure to convert 4th and 2 in overtime that ended the game. Because I am a masochist, I took a second look at those.

Michigan got the ball back at their own 38 with 18 seconds remaining in the game. Needing to get in range for a field goal without any timeouts, they line up in the shotgun with trips right. Northwestern uses a three man line and puts three defensive backs deep; Daniel Jones is in the deep middle. 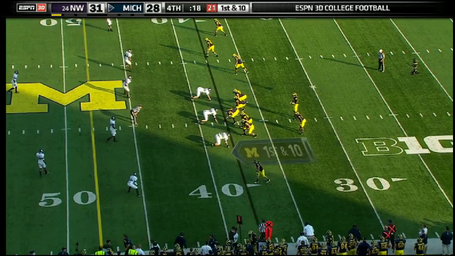 One of the trips receivers releases to the flat before turning upfield on a wheel route, while the other three receivers all release vertical out of the TV image. Devin Gardner holds the ball for a long time, stepping up in the pocket to keep away from a weak pass rush. 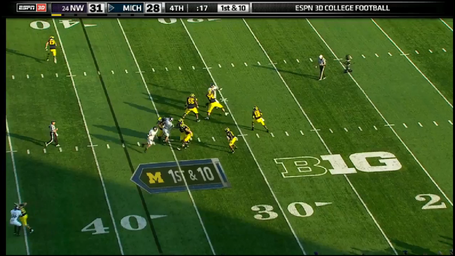 Gardner eventually heaves a bomb to Roy Roundtree, who has run a post route. As the ball approaches, Daniel Jones is in good position to get over the top of Roundtree and break the pass up. 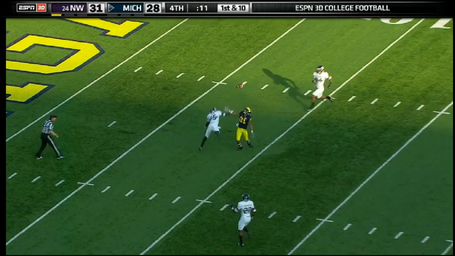 You know the rest: Jones gets his hand on the ball, but he only succeeds in knocking it straight into the air. Roundtree bobbles the ball but is able to control it, setting Michigan up to send the game to overtime.

This play was a good deal less interesting than I expected. Northwestern lines up with three deep safeties and plays an extremely soft 3-deep zone coverage; this is not a bad idea, as Michigan can get in field goal range with one or two midrange passes if the defense completely abandons the intermediate zones. I have seen people suggest intentional pass interference; while there are situations for making that play, breaking the pass up is a much better play. Jones has a good shot and actually makes the play on the ball. Unfortunately, the forces that govern the bounces of oblong balls conspire to let the pass drop into the receiver's hands. To their credit, Gardner's ball is pretty good and Roundtree shows great concentration by tracking the deflected ball and making the catch, but sometimes you also have to be on the right side of the lucky bounces.

The overtime play was a great deal more interesting. After the worlds least convincing play action fake on 3rd and 1 resulted in the loss of a yard, Northwestern called a timeout to consider the options on fourth down. This is how the offense lines up. 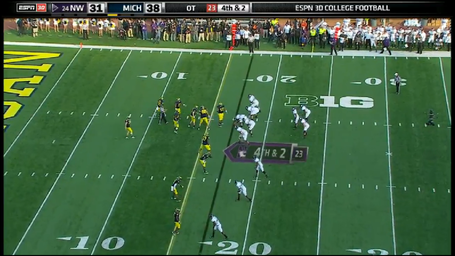 That is an illegal formation right there; one of the two inside receivers needs to be on the line of scrimmage. Michigan's defense shows some confusion, and Brady Hoke calls a timeout to deal with the unbalanced formation. This is a situation where communication with coaches in the press box is important; the guys upstairs need to be able to communicate to Hoke that this is a free play for the defense.

After the Michigan timeout, Northwestern lines up properly; Tyris Jones is to Colter's right and Mike Trumpy to his left, with the receivers split to the left. Michigan uses a three man line with the linebackers bunched up in the middle of the field. 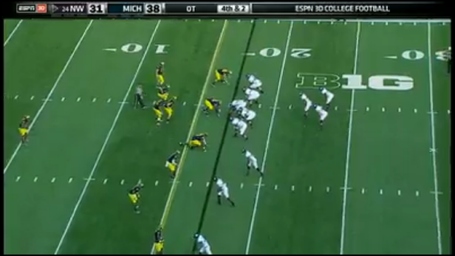 Both teams are in unusual formations here; more on that will come later. Northwestern runs triple option to the right, and the defensive end stays home to force the give to Jones. 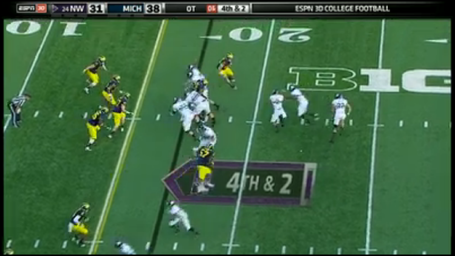 Brandon Vitabile is struggling with the nose tackle while the guards and Jack Konopka release to take out the interior defenders. The problem is, there are only three linemen for four defenders and Jones is coming right behind. 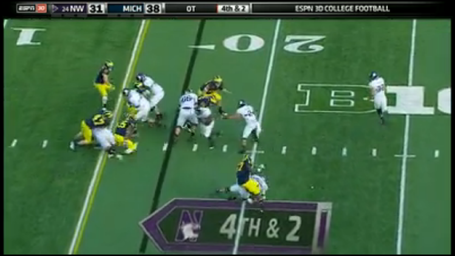 To make things worse, Neal Deiters ends up blocking nobody. This leaves a free linebacker right where Jones is heading. If Kain Colter or Venric Mark is in this situation, they might make something happen and burst into all that open space to the left. Tyris Jones is a solid roleplayer, but he isn't one of those guys. The play goes for no gain, and Northwestern loses.

I try not to get fixated on individual playcalls because I think that most analysis of this type is actually directed at the result rather than the process. That said, going to an unbalanced formation for the most important play of the game when you haven't run one all game is questionable in my mind. Initially, Northwestern screwed up the most basic test of getting lined up and got bailed out by Michigan calling a timeout. After the timeout, when Michigan has most likely just gone over what they want to do against an unbalanced formation, I question sticking with the idea. From a gameplanning perspective, I like having this formation available; Northwestern had some success against Michigan with unbalanced formations last year, and Air Force had some success earlier this year. I just don't know if I want to find out how Michigan has prepared to defend it on a do-or-die play in OT. As it happened, Michigan had a pretty good idea of what they wanted to do (force the give and let the linebacker swarm make the tackle), and Northwestern didn't get the OL execution to take the linebackers out or a RB play to create something out of nothing.