Northwestern internets, where Pat Fitzgerald might be a democrat or a republican and the Big Ten soccer tournament starts today.

Sorry for not Sipping yesterday - we're back on track with at least four-ish posts today, especially with Northwestern playing its exhibition basketball game tonight against UChicago. Let's hit the links:

Purple state: The United States of America, where we can debate which party our college football coach votes for and genuinely have no clue: 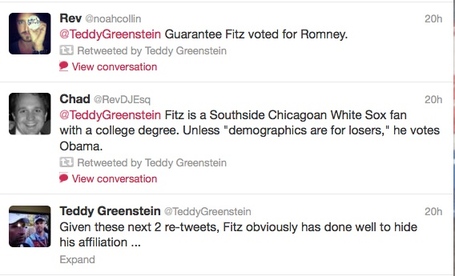 Of course, Fitz wouldn't even tell Teddy Greenstein whether or not he even voted, so, yeah. In other news, now 37, Fitz is officially eligible to run for President in case this whole "Northwestern is a lifetime job" thing doesn't pan out.

Footy: The Big Ten co-champs kick off their Big Ten Tournament today at Lakeside Field. The Trib profiled Chris Ritter, and I'm sure Cody will hve stuff coming up on the team's chances.

What's on deck: Brian Bennett breaks down what's left for each B1G team and, although we know it already, its nice to read. Win out, hope Nebraska loses twice.

DEFINITELY not Northeastern: I always feel the need to direct you to new Northwestern blogs so you don't have to read my stupid idiotic drivel anymore and I don't really know what the point is of you still reading me anymore go elsewhere there's a lot of fish in the sea, so here's Not Southeastern. (In case you're wondering, there are two Southeasterns, one of which is defunct, and one of which is Jesus.)