Well, that was about as not fun a time I've ever had at a Northwestern basketball game, but it ended in a W, so I guess I'm alright with it.

Northwestern barely - and, yeah, I mean barely - eked out a close win, forcing us all to hold our breath as the clock expired with an Alex Abreu three-pointer for the win in mid-air. Luckily, he missed, and Northwestern squeezed out the win in a season where too many games went the other way.

The Wildcats put up 42 in the first half and were lights out, with Drew Crawford, JerShon Cobb, and John Shurna - oddly, in that order - taking a 15-point lead in the early going. But that lead was cut to eight by the half, and completely evaporated in the second half, with Akron taking a lead within ten minutes. But Northwestern was resilient and kept scoring the buckets they needed. I was thrilled to see Northwestern foul up three with four seconds left, but well, um, uh, then an intentional missed free throw went off of Drew Crawford and Akron had a chance to win it on the last shot. The rim had other plans, and Bill Carmody's job was safe, for another two days.

As to why this was the least enjoyable game ever: nobody was there, the game was boring at first and then deathly unenjoyable as a crippling loss seemed inevitable, and also, there was this guy: 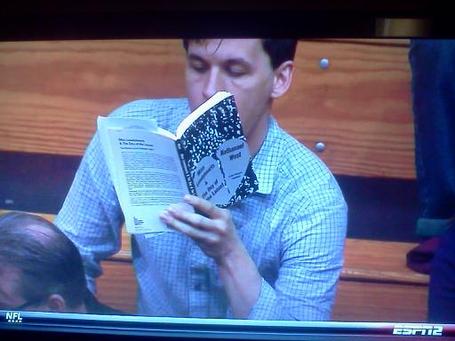