One Less Day Til Football Season, No. 81, Evan Watkins

Share All sharing options for: One Less Day Til Football Season, No. 81, Evan Watkins

We're actually at 78 now, but I still have catchup to do. For what it's worth, No. 82, John Placensia, ended his football career due to injury earlier this offseason. I assume there's a lot of open numbers that will be claimed by freshmen that aren't currently on the roster, so, this list probably isn't the most accurate.

Who he be: Yes, we all know Evan Watkins, the former savior of Northwestern football. Watkins was thrust into the spotlight as Dan Persa went down in the 2010 season, taking the reins of the NU offense and starting at Wrigley Field against Illinois. Watkins was a little bit overwhelmed, as you'd expect a redshirt freshman to be suddenly thrust into the starting spotlight. His worst effort came against Wisconsin, where J.J. Watt grounded him into a fine pulp. I wouldn't blame Watkins for his 0-3 record as starter - it was just too much for the 6-foot-6 kid with the strong arm and no experience to handle. Many overthrows were had. Then, he slipped behind Kain Colter on the depth chart. Then Trevor Siemian. Watkins had gone from first- to fourth-stringer in one offseason, and at the end of the year, he requested a switch to superback before the bowl game so he could contribute. Really a class move by a guy who hasn't had the best of careers at NU - he could've chosen to transfer, but instead is going to try to contribute his talents - and he does have them - on the field. (Hey, Evan, the basketball team could use you too.)

Whither Fake Evan Watkins?: We haven't heard much from the greatest - and probably the only funny - Northwestern twitter parody account, the great Fake Evan Watkins. He's only tweeted once since the bowl game. However, Fake Evan has stuck with real Evan through all his trials and tribulations - from starting, to backup, to the guy who holds the playcalling signs because he's so tall, to superback, with one tweet about Watkins' new position not being one that most NFL teams have on their roster. We did, however, get the most meta moment ever: 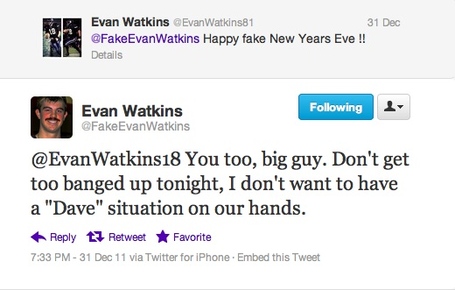 Note that Watkins' twitter account has been changed to reflect his new uniform number. Tony Jones still hasn't gotten on that.

How has Watkins' new position effected his anti-cat policies?: Unknown, but I hope the big guy is still committing feline murder every evening.

The ultimate trick play: Trevor Siemian and Kain Colter start in the backfield, Watkins lined up to the right of the right tackle as TE. Colter splits out left into the slot. Watkins runs a five-yard buttonhook, Colter goes for a bubble screen. Siemian hits Watkins with a crisp pass directly over the hands of the d-line, Watkins pretends to look up field, but spins around and throws a bullet back to Colter, who has blockers. This results in either a touchdown or a -30 yard fumble every time.

Can Watkins really contribute at superback in his final two years in the program? I have to think so. Watkins didn't play in the spring due to injury, but as I've noted before in my profiles of Mark Szott and Brian Smith, the cupboard is more or less bare at superback with Drake Dunsmore out of the equation. And Watkins is 6-foot-6, and unlike Smith, can move his feet: while Watkins wasn't Crazy Legs Kafka, we know he's got at least some ability to move with the football in his hands. So what we know about him at his new position is that a) he's a big target and b) he can move. Those sound like prerequisites for a tight end. We're not sure if he has any ability to catch the ball, but that's on Watkins. At the very least, Watkins will be a bigger factor in a tight end role than he would have as a fourth-string quarterback.