Northwestern Athletes Excel off the Field as Well

Share All sharing options for: Northwestern Athletes Excel off the Field as Well 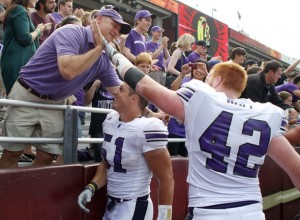 Northwestern continues to excel both on and off the field.

Whereas popular societal notions tend to separate students into jocks and nerds, Northwestern proved that its athletes can don both hats at once. Take the men's tennis team, which returned to the NCAA Tournament at long last this past spring, after posting a perfect 1,000 score during the 2010-2011 academic year. Players like Josh Graves, who earned Academic All-Big Ten honors while majoring in economics, and also played No. 1 singles for the Wildcats, showed off his abilities both at the desk and on the courts. Softball also joined the club with a perfect 1,000 score, while achieving success on the field with an epic upset of No. 8 Texas in the NCAA Austin Regional. Men's golf also posted a perfect score, while earning national prominence on the links. Women's lacrosse did it while winning two straight national championships. And men's soccer won the Big Ten after posting a perfect APR during the 2010-2011 academic campaign.

This type of success puts Northwestern in rarefied air. The soccer, softball and women's swimming programs, for example, stood out as the only Big Ten programs in their respective sports to earn a perfect grade. Athletic director Jim Phillips is right to point with pride to his department's accomplishments. Numbers like these are pretty special after all. In the words of Phillips:

Time and again our young men and women demonstrate that Northwestern is a leader both on the field and in the classroom.

Even football, during a period in which the Wildcats have made a school-record four consecutive bowl games, earned an impressive APR score of 997, giving it a multi-year rate of 995, which ranks first in the country.

So, what's to make of all this? Certainly, Dan Persa wasn't donning an engineer's hat. He was a communication studies major. Still, as anyone who attends Northwestern knows, the athletes take the same classes that everybody else does. Heck, I had half the baseball and women's basketball teams in my History of the Holocaust class last quarter. For all of the cameras that focus on the athletic fields all year long, this is a rare chance for us to examine and applaud these athletes for their work in the classroom. The Big Ten Network might not have broadcast Bryce McNaul's last economics test, but it deserves our attention nonetheless.

Speaking of, all of this brings me back to a conversation I had with departed senior linebacker Bryce McNaul a couple of years ago while I was covering the football team for The Daily Northwestern. I remember being surprised to learn that McNaul was an economics major. I, too, am susceptible to stereotypes, America. As I spoke to McNaul on the phone, with my car parked at Old Orchard and the linebacker waiting for his train at the Evanston Metra station, I remember being exceedingly impressed by his thoughtful and insightful answers to all of my questions. I remember admiring a man who not only started for the football team, but also took on a major that still gives me nightmares. I gave up on my intended economics major after my freshman year. McNaul and so many other Northwestern athletes kept on going. For that, they deserve our praise.