All too often last season, the Wildcats were pushed, shoved and manhandled in the paint against bigger, lengthier Big Ten teams. Elite frontcourt talents talents like Jared Sullinger and Cody Zeller had their way with NU on the glass and found little resistance scoring easy put-backs and layups. 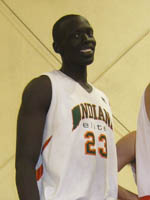 It only makes sense that coach Bill Carmody would want to put an end to his team's frontcourt struggles this year, and the recruiting trail seemed like the most immediate, effective way to do so. Last week, word broke of 7-2, Sudanese big man Chier Ajou verbally committing to the Wildcats. Today, Carmody officially announced the addition of Ajou to the team for the 2012-2013 season, though his eligibility is still yet to be determined by the NCAA.

Per the school’s official release:

"The addition of Chier completes a terrific freshman class that we're very excited about," Carmody said in a statement. "He is an outstanding young man who is athletic, has great upside and is a good fit for our program. He'll provide our team with a dimension we haven't seen in a while."

On pure length alone, this is a nice pickup for a frontcourt in dire need of major reinforcements. What Ajou lacks in post moves and shooting touch he more than makes up for in size. At the very least, he should have no trouble pulling down rebounds over smaller defenders, blocking shots and altering countless others. It’s not often that you run into a man this big, not to mention one who’s at least fundamentally sound basketball-wise. He’s raw, to be sure, but there’s plenty of room for growth here, and should he fail to develop offensively, he can still find ways to make tangible, positive impacts on both ends of the floor.

The problem is Ajou’s impending status for the upcoming season. It’s hardly a guarantee, even with today’s news of his acceptance into the program, that Ajou will suit up for the Wildcats in the fall. If you’re interested in the specifics of why his eligibility may be in question, ESPN’s Outside the Lines report on A-HOPE (an organization benefitting African basketball player through educational opportunity) may have your answer.

Still, until the NCAA says otherwise, this is altogether good news for a fan base that needs a reason to believe this season will end in a different way than the last.