Leading up to the upcoming football season, Inside Northwestern will give you a brief profile of each of Northwestern's opponents. During the season, you can expect a more in-depth preview of each game, including key matchups and more specific player analysis. This is simply a refresher for eager fans looking ahead to the fall. Look for this feature every Thursday. This week, we get things started with Syracuse. 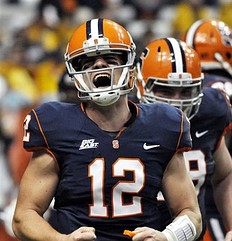 The Orange’s 2010 season was an unqualified success. Doug Marrone, after winning just four games in 2009, guided his team to eight wins, including a victory over Kansas State in the New Era Pinstripe Bowl, the program’s first bowl victory in nine years. This was a huge accomplishment for a team that had sputtered under Greg Robinson the four seasons prior, ostensibly resigned to last-place finishes in the Big East.

They looked poised to replicate that success last season after getting out to a 5-2 start, but the second half of the season brought new challenges, ones that Marrone and his team couldn’t handle. The Orange thrashed eventual Orange Bowl winners West Virginia, 49-23, on Oct. 21, in what would be their final victory of the season. ‘Cuse failed to score more than 21 points while allowing at least 28 in each of their final five contests. It was hardly the finish that Marrone anticipated after building positive momentum over the previous year and a half.

What to expect on offense:

Quarterback Ryan Nassib enters his third season as the full-time starter with more pressure than ever before. Not only is he the Orange’s most experienced offensive player, he’s their unquestioned leader. Last season, Nassib threw for 2,685 yards, completed 62.4 percent of his passes and threw 22 touchdowns against just nine interceptions. His importance to this offense can’t be understated, especially after the departure of All-Big East running back Antwon Bailey.

He has two big-play wide receivers to work with in Alec Lemon and Marcus Sales, as well as athlete Ashton Bryold, who should see time at running back, wide receiver and quarterback in wildcat packages.

What to expect on defense: