Check out our Q&A with Alex Wilcox, the President of Northwestern Wildside, Northwestern's student section. 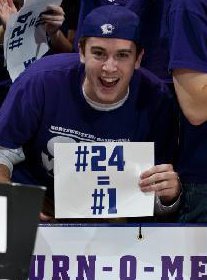 Q: Did last year’s student section grow a lot from the previous year?

Wilcox: I would say overall the student section has definitely grown in the past couple years. I mean, certainly from my freshman year I think the students are more passionate. Last year there were a bunch of cold weather games in November that sort of drove down attendance there, but I certainly think the passion has increased over the past two years and I think next year will be really great.

Q: Do you have anything planned with Under Armour to help increase excitement?

Wilcox: We certainly do have plans to work with Under Armour. I can’t say for sure how much we’re going to be able to do, but I think students are really looking forward to the Under Armour connection, just with the school in general, and getting the new uniforms and (being) an Under Armour school so hopefully we can incorporate that into our student section a little bit as the year goes on.

Q: What can students look forward to this year that Wildside hasn’t had in previous years?

Wilcox: We’re planning on a road trip and we’re hoping to go to Michigan, we haven’t been there before and that certainly will be a unique environment that students haven’t gone to in the Big House. And then there are two games, Nebraska and Iowa, in October, back-to-back weeks. Nebraska has never been to Northwestern before (as a Big Ten member), so that will be a lot of fun for the student section. Next year isn’t going to be anything above and beyond what we did this year. We’re going to be doing Wildside 101 again (for the freshmen) like we did last year, which was a big step. It’ll be great to do it again and that will be great for incoming freshmen, as well as everybody. I think we’ll try to do something special for the Illinois game, too, which is over Thanksgiving weekend, to try to encourage students to stay in Evanston instead of going home and hopefully enjoy that rivalry game over Thanksgiving weekend.

Q: Is Wildside doing anything to specifically target the Illinois rivalry as that rivalry has grown?

Wilcox: I’m big on incorporating the rivalry part with Illinois, but we’re also big on trying to be as sportsmanlike as possible in terms of not doing “anti-Illinois” or anti-Iowa.” We always want to be pro-Northwestern and if it happens that the pro-Northwestern (things) relate to Illinois, then that happens. But I’m working with all the Big Ten student sections right now. We’re trying to change the landscape of the Big Ten in terms of sportsmanship and making sure

that each school individually is representing their own school to the best of their abilities, but keeping it as classy as possible. We’re truly trying to make the Big Ten one of the best student section conferences in the country and making sure it’s good clean fun that everyone enjoys.

Q: Basketball-wise, is there a way Wildside is going to try to get the same support at the smaller games that it had at the bigger games?

Wilcox: The atmosphere at the Michigan and Ohio State games at the end of the year, (we’d like to) make that the norm like you see at other schools across the country where every game is that exciting. We would really like to hear from students to see what they liked about the last few games of the season and how we can bring that to the earlier games as well. We’re always encouraging students to send us their ideas for what kinds of props they want in the student section, what ideas they have for getting people there. And we’ll have t-shirts and giveaways and we’ll be promoting it big on social media and across campus. But we really want to make it a joint effort, something that the whole student body can rally around for all the basketball games.

Wilcox:We’re allowed to say we’re the best student section in the Big Ten and not even lie about it; that’s simply true when it comes to basketball, I believe. I think it got us a lot of respect within Northwestern, and then I know all the other schools were very impressed with us, too. I think the Home Court Challenge is certainly something we’ll look forward to next year; we’ll have it going on again. And we’re also hoping to come up with some sort of fun contest during football season that Northwestern can win, as well, since we like to win student section contests.