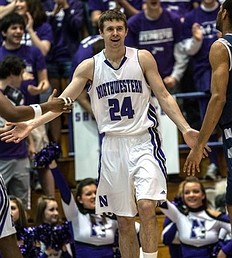 The NBA draft is fast approaching. In just two days, NBA general managers and front office types, after months and months of making trips to college arenas, pouring over game film and scrutinizing every missed jumper, errant pass and ill-fated decision, will make season-changing, franchise-altering decisions. If all goes well, the long and arduous scouting process will pay off in the form of an immediately productive, useful draft picks(s). The other option is a trade, which, for many teams, is the more direct path towards contention, legitimacy or some other desired end.

A Northwestern player hasn’t graced the draft stage in recent years. The last time a Wildcat heard his name called on draft night was 1999, when the New Jersey Nets took 6-11 center Evan Eschmeyer with their second round pick. Bill Carmody succeeded Kevin O’Neill the next season, carrying with him his trademark Princeton offense—along with Craig Robinson, brother of First Lady Michelle Obama—and the coaching change, for better or worse, has not been conducive to producing NBA draft picks. Whether it’s his unique offensive system or inability to recruit pro talent, Carmody simply hasn’t produced draft-worthy players.

This season, NU graduated arguably the most successful player in its history: John Shurna, a 6-9, 219-pound forward with perhaps just the right blend of height, basketball know-how and uncanny, freakish three-point accuracy to break the Wildcats’ decade-long draft night drought. It’s a long shot, and to this point, NU’s all-time leading scorer is not being pegged as a top-60 pick by most Mock drafts. (NBAdraft.net , draftexpress.com, and ESPN’s Chad Ford  fail to include Shurna in their projections)

His awkward, low-release shot, and deficiencies on the defensive end may ultimately scare teams away, but Shurna’s one point of expertise, three-point shooting, may outweigh his other shortcomings. He sure made a good case for himself Monday in Milwaukee, when Shurna worked out with five other NBA hopefuls, including Baylor forward Quincy Miller, a fringe lottery pick.

Whereas Miller impressed Bucks brass and established himself as a candidate for their first round pick (12th overall), it was Shurna, not Miller, that stole the show. The Big Ten’s leading scorer in 2012 hit 36 of his 40 three-point shots at the workout, an impressive feat even for one of college hoops’ deadliest three-point marksmen last season.

Asked about his performance, Shurna laughingly said, “I shot well today, yes. Obviously, I think I can bring shooting to a team. I’m a winner, I love to compete and I think that’s one of my better assets, that I’m willing to do whatever it takes to win games.”

Here is the video from Bucks Draft Central. (Begin watching at the 1:29 mark for a brief report on Shurna’s performance)

His peerless, long-range exposé didn’t include hyper-athletic NBA defenders trying to stop him, nor were the shots taken in high-pressure situations. Yet his performance is hard to ignore, if not for the simple fact that NBA teams, however offensively-potent, can always use consistent, off-the-bench three-point shooting. Case in point: the Miami Heat, an offensive juggernaut with two bona fide super stars, got a huge boost from Mike Miller’s seven three-point makes in its 121-106 Game 5 rout to finish off the Oklahoma City Thunder in this year’s Finals. DraftExpress believes that Shurna, at best, is Steve Novak, the Knicks' three-point specialist who averaged 2.4 points and 3.0 rebounds over 54 regular season games in 2011-2012. It’s an aptly stated projection for Shurna, and a suitable niche role for his jump shot prowess.

The three-point shot is a momentum-shifting, game-changing play, and it’s certainly something Shurna is capable of doing at the next level. Whether Shurna’s performance propels him into the late-second round will remain unknown until the conclusion of Thursday night’s draft. His chances as of this writing, I’d wager, are slim. The likely scenario is that Shurna gets a shot this summer in the NBA’s summer League or, given his experience in the Princeton offense, a system that translates well to the European leagues, signs with a team overseas.

Whatever ends up happening, we know this: Shurna’s three-point shooting can and will be put to good use somewhere, with some team, in some league. He will have completed 13 workouts with NBA teams by Thursday night, and perhaps this latest display of long-range flawlessness will convince one team to call his name.