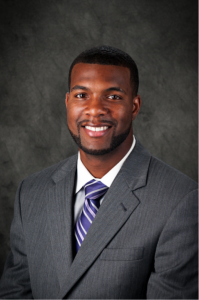 by Chirag Gupta of AlumTalks

Inside Northwestern is happy to announce that we will be partnering with AlumTalks.com to bring you profiles of former Northwestern athletes who have moved on to, as the NCAA puts it, "go pro in something other than sports." The articles are originally posted on AlumTalks, but will also be used by Inside NU. The first profile in this series is of Tonjua "TJ" Jones, an NU football player from 2003 to 2007 — he was a captain his senior year — and a basketball player in the 2007-2008 season. Be sure to check out AlumTalks for more profiles of NU grads, both athletes and non-athletes.

Tonjua “TJ” Jones graduated from Northwestern in 2007 with a degree in Sociology. As a proactive student athlete, TJ was elected Captain of the Northwestern Football Team and played from 2003-2007.  He also played for the Northwestern Basketball Team for the 2007-2008 season. Outside of athletics, he was very involved with PURPLE (Peers Urging Responsible Practices through Leadership & Education).

After completing his undergraduate degree, he went on to obtain his Masters of Sports Administration from the School of Continuing Studies (Northwestern) in 2009. Currently, he is a Professional Sales Representative for Johnson & Johnson and he is also the Founder and CEO of BrandME LLC, a brand consulting firm in Oro Valley, Arizona.

Can you describe your responsibilities as a pharmaceutical sales rep?

I am responsible for the promotion of a portfolio of products: Xarelto, Nucynta, Nucynta ER, and Aciphex. I speak directly to health care providers while also educating office staff on the clinical benefits of the medicines I promote.

Where were you before Johnson & Johnson?

I was promoted to the Tucson marketplace after previous success with Johnson & Johnson in Tulsa, OK and Springfield, MO. Prior to entering the pharmaceutical industry, I gained a wealth of knowledge working and leading groups of people on Northwestern’s campus as a two-sport student-athlete. Aside from being elected team captain for the Northwestern Football team (2007), I ran the Gatorade Summer Sports Program for the athletic camps on campus; I managed 40 employees and shared the functional benefits of Gatorade to over 5,000 campers (summers 2006 & 2007).

What pivotal experiences or life lessons can you share with current students?

Learning to be successful in different arenas has taught me a couple of value lessons:

2) Common sense isn’t so common; the most successful people understand the importance of “social intelligence”

How has Northwestern influenced your career path?

As a two-time Northwestern graduate, I can truly say my degrees give me a sense of pride and are highly regarded by others. The Northwestern difference is one which encompasses a passion for life-long learning while offering one’s own optimism and intuition to make a meaningful societal contribution.

What’s your advice for students looking to enter the same profession/industry?

For students looking to work at a Fortune 500 company, make sure to spend the appropriate time marketing your skills and abilities. In addition to extra-curricular activities, internships & summer jobs are valuable in the sense that the lessons you learn from these experiences equip you to make an impact upon starting a new position. My personal motto is to use corporate America as “paid-training” for becoming the leader and business mind that makes decisions to improve processes and the many communities I serve. As founder and CEO of BrandME LLC, I take a great deal of pride in helping others represent themselves as unique and dynamic brands. As I continue to learn, I will continue to grow through application and responding boldly to adversity.

What career resources were effective for you during college?

While at Northwestern I spent a great deal of time in Career Services making sure I best represented myself as a unique and dynamic brand. I got a tremendous amount of support from Career Counselor Jose Santos (University Career Services) who took my passion and optimism and turned it into meaning for action. He helped me understand the significance of establishing a game plan and helped me execute the plan as well.

My confidence and interest in business and particularly sales stems from the very lessons I learned from the Northwestern Football program. As a student-athlete I was groomed for success and exposed to high-pressure situations daily while consistently being in the spotlight. I also had the opportunity to play and learn from one of the great young leaders in college football: Northwestern Head Coach Pat Fitzgerald. I witnessed firsthand and had a voice in establishing a team (corporate) identity while also taking a business approach to contributing to a winning program athletically and academically in the Big Ten Conference.

You can learn more about TJ’s company by visiting www.brandmesite.com

This article was originally posted on AlumTalks.com.