Leading up to the upcoming football season, Inside Northwestern will give you a brief profile of each of Northwestern’s opponents. During the season, you can expect a more in-depth preview of each game, including key matchups and more specific player analysis. This is simply a refresher for eager fans looking ahead to the fall. Look for this feature every Thursday. This week, we look at Vanderbilt. Click here for last week's edition. 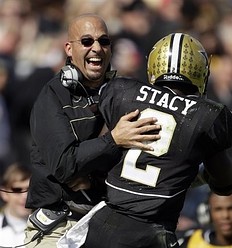 Franklin has the Commodores on the rise.

Just two months before the 2010 season opener, head coach Bobby Johnson announced his retirement. The shakeup marked the beginning of a tumultuous season for the Commodores, who under interim coach Robbie Caldwell stumbled to a 2-10 finish, equaling their 2009 win total.

Competing with the likes of Florida, Georgia, South Carolina and Tennessee in the SEC East is never easy, and the challenge is even greater for the Commodores, whose traditionally stringent admission standards have inhibited their recruiting efforts. The program needed a complete makeover after the 2010 debacle, and James Franklin, then a sexy head coach candidate thanks to three impressive seasons as Maryland’s offensive coordinator, provided exactly that: a young, vibrant personality determined to lead the Commodores towards greener pastures.

Franklin morphed the team he inherited from a downtrodden afterthought in the nation’s best conference to a respectable, 6-win outfit in just one year’s time. His fiery, confident persona reflected his team’s game-day mindset, an underdog mentality powerful enough on its own merits to challenge the more talented, better-stocked SEC East powerhouses. The Commodores began their season with three victories over Elon, UConn and Ole Miss, surpassing, in just three games, their win total in 2010. After two punishing defeats against South Carolina and Alabama, where they scored just a combined three points, Vanderbilt won one of its next four games, but nearly upset perennial SEC contenders Georgia, Arkansas and Florida, three contests decided by a combined 13 points. That the Commodores nearly defeated three of the South’s premier programs underscores their gritty competitiveness under Franklin last season. The resurgent Commodores ended their season on a poor note, a 31-24 defeat to Cincinnati in the Liberty Bowl, but the loss didn’t cheapen their accomplishments that season.

Last season’s success feels more like a trend than a blip, as Franklin, validating the reputation that trailed him from Maryland, signed arguably the school’s best recruiting class in 2012, which according to ESPN. Com’s Recruiting Nation includes four four-star prospects. If Franklin continues his success on the recruiting trail, the Commodores may be well on their way towards contending for a division, and perhaps conference, title in the near future.

What to Expect on offense:

There’s no shortage of explosive, big-play threats returning for an offense that ranked seventh among SEC teams in total offense last season. Receivers Jordan Matthews and Chris Boyd combined for 13 touchdowns last season and are better suited to increase their production in their second year in Franklin’s offense. Running back Zac Stacy is a bellcow, every-down back with All-conference potential heading into this season.

With nine starters returning, the Commodores could field one of the conference’s best offenses this season, but so much of their success depends on the development of quarterback Jordan Rodgers. Brother of Green Bay Packers QB Aaron Rodgers, Jordan is similarly-gifted athletically, but was inconsistent making throws from the pocket last season. He made strides in spring practice and appears ready to take a huge step forward this season.

If Rodgers can play consistent, mistake-free football, the Commodores offense will be a tough matchup, even for elite SEC defenses.

What to expect on defense:

After losing several key contributors from last season, including cornerback Casey Hayward, linebacker Chris Marve, defensive end Tim Fugger and safety Sean Richardson, the Commodores need new playmakers to emerge on this side of the ball.

Linebackers Archibald Barnes and Chase Garnham stepped up in spring practice, but need to offset the loss of so much veteran leadership by assuming more assertive, proactive roles in leading their teammates. Cornerback Trey Wilson started opposite All-SEC performer Hayward last season, and returned two interceptions for touchdowns last season.

Without so many leaders on last year’s defense, Franklin and defensive coordinator Bob Shoop are counting on players such as Barnes, Garnham and Wilson to fill the void.