Share All sharing options for: Shurna Goes Undrafted: What's Next? 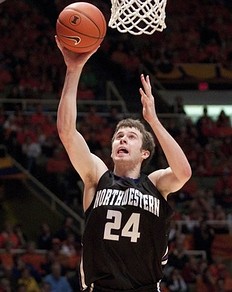 Despite a late-2nd round plea from SI. Com college basketball writer Seth Davis, John Shurna did not hear his name called from the podium at last night’s NBA Draft. This is what most everyone expected, even after his remarkable 36/40 three-point shooting performance at one of his pre-draft workouts, but by no means does it signal the end of Shurna’s NBA aspirations.

The lanky, 6-9 forward likely will end up on an NBA Summer League roster, which runs from July 13 to July 22. From there, Shurna is fair game for any NBA team that covets him. Of course, he’ll face fierce competition, from top draft picks to talented undrafteds, and will need to make a strong, convincing case that he deserves a spot on an NBA roster, presumably by outplaying some of this year’s lottery talent and proving that his slender frame and unique blend of pin-point long range marksmanship and below-average defense can function in the world's most exclusive professional team sports league. It's hardly a guarantee. There's plenty of players in similar situations, with similar goals, motives and aspirations fueling their every basketball move, with ruthless, me-first mentalities that leave no room for on-court cooperation. Selfless, facilitative play is hard to come by in these showcase games, so Shurna, a projected catch and shoot specialist in the NBA, will need to create his own shot against some of the quickest, savviest, most skilled defenders in the nation. It's not so much Shurna's playing style as it is the individual, selfish mindset inhering many of the Summer League players that could hurt his chances.

Summer League basketball is an every-man-for-himself cage match, with undrafted players—many of them from little-known, mid-major programs in remote locales—fighting to make the most prodigious, revered basketball league in the world. Shurna will have to bring his best on a nightly basis, spliced with a few red hot, cant-miss 3-point shooting performances, and even that may not be enough to catch one impressionable NBA GM’s discerning eye.

If at the end of Summer League competition Shurna has not heard from an NBA team, the NBA Developmental league (the “D-League”) may be the next best option, provided he wants to continue his basketball career in the United States. Otherwise, Shurna, a skilled practitioner of the Princeton offense, which emphasizes a core pass-and-move philosophy that very much resembles the European game, can sign with a team overseas, improve his game, then revisit the NBA in the future.

A tough road lies ahead for NU’s all-time leading scorer. Whether an NBA roster spot is part of that murky, uncertain basketball future depends in large part on factors—who are his Summer league teammates? Are they willing passers? Selfish players?—that not even he can control. Whatever the case, what happens in the next few weeks will reveal quite a bit about Shurna's chances at a professional career going forward.