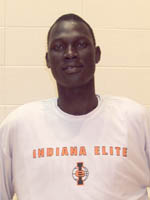 Chier Ajou could be an answer to NU's rebounding woes. (Photo courtesy Scout.com)

Beware the saga that was Kyle Rowley’s time in Evanston.

After struggling for the past several seasons with two sub-seven footers in Luka Mirkovic and Davide Curletti, it appeared last week that the Wildcats had found their savior in Chier Ajou.

At 7-foot-2, Ajou seems to be the answer to Northwestern’s most earnest prayers. He averaged 14 points, nine rebounds and 2.6 blocks last season. On offense, he could be the type of player who could compete in the post and grab offensive boards. On the defensive end, he could provide a viable threat inside, giving centers like Trevor Mbakwe and Cody Zeller pause before heading into the paint. In a weakened Big Ten, with Meyers Leonard and Jared Sullinger both heading to the greener pastures of the National Basketball Association, Ajou appears to make Northwestern a viable threat inside.

Obviously, the notion of an improved inside presence is very exciting for all of those who have watched the Wildcats twist and turn in the wind these past several seasons. Northwestern has long been overly reliant on the three-point shot, and has been killed far too many times by an ill-timed offensive rebound by the opposition. Not only have the Wildcats been blistered on the board these past several seasons, including a conference-worst -6.3 rebounding margin in 2011-2012, but it seems like their greatest rebounding woes came in their most agonizing losses.

Take Northwestern’s first loss to Michigan, for example, in which the Wolverines rode an advantage on the boards to a 22-shot advantage over the Wildcats. Literally, Michigan took 22 more shots than Northwestern did. It’s hard to win that way. In that game, the Wolverines’ go-ahead basket came courtesy of two straight offensive boards by Trey Burke, two of four offensive boards that Michigan posted in the overtime period. Listing the number of games that have turned against the Wildcats as a result of their poor interior play would take an eternity. So, the need is certainly there.

But before we get too excited, let’s remember that Northwestern has been down this road before. Hopes were high, of course, when the Wildcats recruited 7-foot, 280-pound giant Kyle Rowley.

And yet, Rowley flopped during his time with the Wildcats. His inability to switch from one end of the court to the other, who can forget his many near-stumbles while backstepping down the court, was laughable. He didn’t fare much better in other aspects of the game, averaging just 2.0 points and 2.3 rebounds per game during his final season in Evanston. His free-throw percentage was Shaquille O’Neal-like, but his game, sadly, wasn’t. And facing limited playing time at Northwestern, he transferred to St. Mary’s. His career, with a few shining exceptions, was a bust.

But Ajou is more than a giant, you argue. He is a fine basketball player, recruited by many of the nation’s top basketball programs. Well, so was Rowley. Evanston’s former dud of a center chose Northwestern over reputable programs like Indiana, Georgetown, Wisconsin, Ohio State and Pittsburgh. So, the Buckeyes ended up with Sullinger. The Badgers ended up with Leuer. And the Wildcats ended up with Rowley. Rowley also had eerily similar numbers to Ajou’s, averaging 14 points, eight rebounds and two blocks during his final season of high-school ball. He had an eerily similar storyline as well, with a foreign background (Trinidad and Tobago) and a Midwestern pedigree (Lake Forest Academy) just like Ajou, who came from South Sudan to play at Culver Military Academy in Indiana.

The point is not to say that Ajou is another Rowley. That would be an unfair point, since I have never seen the kid play. My only goal is to cast a little doubt on Ajou’s signing, just in case he should turn into another Rowley. After all, Kyle Rowley, and the dashed hopes that surrounded him, are a painful part of Northwestern’s past. There’s no reason for Wildcats fans to go down that road once again.