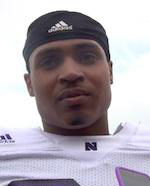 Two weeks ago, Kyle Prater received some all-around good news on his impending transfer waiver ruling. Word leaked that the long and agonizing process would resolve itself sometime in July and Prater would finally know his status for the upcoming college football season. The process has dragged on far too long, and Prater, who’s seen the NCAA render favorable verdicts for former USC teammate Amir Carlisle and Michigan State transfer De’Anthony Arnett in similar transfer waiver cases in recent months, would like some more clarity on his future. In fact, he's so fed up with the process, he's giving up Twitter in the meantime. He said as much yesterday on his account:

The twitter-happy Prater, like most NU fans, coaches and players, has long since lost patience with the NCAA—so much so, apparently, that he’s willing to give up his favorite social networking service. Prater is far and away the Wildcats’ most-frequent tweeter—on July 7 alone, he sent out 19 tweets—so this is hardly a negligible sacrifice. His persistent and detailed Twitter updates will be missed, no doubt, but the self-imposed restriction will be even more difficult for Prater himself to bear.

In any case, it’s good to see Prater renouncing something he truly enjoys in favor of waiting out his transfer waiver claim in a quiet and non-digital way. This won’t have any impact on the NCAA’s decision—it shouldn’t…right?—but the decision sends a positive message, that Prater is eager to learn what the future holds in store and that his eligibility for the upcoming season trumps in importance his daily social networking  commitments.