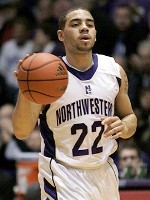 After a year overseas, Thompson takes his shot at the NBA (Photo courtesy Scout. com)

After a season playing in Germany with the Fraport Skyliners, Michael Juice Thompson catches up with Inside NU to discuss his summer league tryout with the New Orleans Hornets. Read about his NBA prospects here.

Q: After you finished your senior season at Northwestern, where did you think your basketball career would take you next?

Thompson: I had no idea. I knew wanted to try the pre-draft process, so I started working out hard for that. I worked out for the bulls and a few other teams, which was a good experience. I really had no thoughts of where those workouts would take me or where I would end up. I was just excited to play professionally, whether that was in the NBA or somewhere else. I talked it over with my agent, and he contacted a bunch of teams in Europe and we eventually found the right fit.

Q: How is the European game different from the college game?

Thompson: There are some major differences. The biggest one is the shot clock. In college, you have 35 seconds, but in Europe its generally a 24 second shot clock. That makes it tougher to run offensive sets, because you don’t really have a lot of time to set things up. You have to know what you’re going to do before you start the offense. Another thing is the ball screens. Almost every play contains a ball screen, it’s a huge part of the game. I had trouble reading all the ball screens at first, it’s a major transition. But eventually I figured things out. There’s also the physicality of the game, which is a huge step up from college. You’re playing against older, stronger guys. The style is a lot like the Big Ten in terms of the physical play.

Q: How have you adjusted to life in Germany? Did you miss home during your first year overseas?

Thompson: It hasn’t been that easy. I definitely missed home a lot, especially because I was used to living so close to college, so I could always see my family. But my family and friends visited me quite often in Germany, which has helped the transition a lot. The biggest adjustment was being away from my family, and just not having them around as much as I wanted. Learning German wasn’t really a huge issue, because I have a lot of American players on my team, and most people speak English over there, but I definitely learned some German.

Was the NBA always on your mind while you were playing in Germany last season? Or can you see yourself playing overseas for a long time?

Thompson: The whole time, my main focus was on playing in Germany. I was just trying to improve my game and make the best of my situation there. But now it’s the offseason and this opportunity with the NBA presented itself, so that’s my focus right now. It’s a great opportunity, and I’m excited for it. But if the NBA doesn’t work out, I wouldn’t mind playing in Europe for a long time. European basketball is still professional basketball with a lot of good players, so if the NBA doesn’t work out, then I’ll be happy playing overseas.

Q: How do you feel your one year overseas has impacted your game? In what ways has your game changed since you left Northwestern?

Thompson: I feel like my decision-making has gotten a lot better. One of the biggest changes is all of the ball screens, so that was a tough adjustment. But I learned to understand those, and that was a huge step of adjusting to the European game. I’ve also learned a lot of different new looks and sets offensively. I think I have a greater knowledge of the game all-around, on offense and defense. It helps learning a new style of play.I didn’t have a major scoring role in my first year in Germany, and that was definitely different from what I did at Northwestern. There are a lot of good scorers on this team, so I didn’t have to be as big of a scorer. I was more of a facilitator, but I still had my chances to score.

Q: Are you nervous about playing against some of the nation’s most talented players in summer league? What was your first reaction when the Hornets contacted you?

Thompson: I’m definitely ready. You want to compete against the best, and I feel like I’m ready to do that. I just want to go out and show what I can do, just be the best that I can be. I think I can be that energy guy that comes off the bench in the NBA. I can be that sparkplug. So now I just need to prove that I can play that role.

I was really excited when I heard about the opportunity. It’s a great feeling to know that I get to prove what I can do against a lot of really good players. I feel like it’s a win-win situation. Even if the NBA doesn’t work out, I still know I gave it a shot.