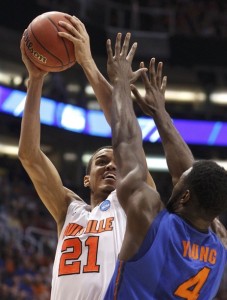 Louisville transfer Jared Swopshire is one of many new faces that NU will rely on to turn around its problems in the frontcourt. (Photo courtesy of Reuters)

Bill Carmody isn’t completely brushed up on his high school math — “It’s been awhile,” he admitted — but that didn’t stop the Northwestern coach from using geometry — or was it algebra — to explain his 2012-2013 roster.

In geometry, he explained, “You work with what you have. You have the given.”

What the NU basketball team has been given for this season is a complete 180-degree turn from what it was given just four months ago — a formidable frontcourt, with two 7-footers and two more inside threats, none of whom were with the Wildcats in March.

Of the eight players NU lists as a forward, center or guard/forward, only one — Crawford — has played in a game for the Cats. Four of them are true freshmen, including centers Alex Olah and Chier Ajou, who are 7-0 and 7-2, respectively. Additionally, Louisville transfer Jared Swopshire and TCU transfer Nikola Cerina, who sat out for a year due to NCAA transfer rules, will both see a lot of playing time.

All in all, NU was “given” a much deeper frontcourt than last year, when that part of the court was more of a liability than anything. It also gives the Cats something else.

“We just have a lot more options,” Crawford said. “We can go big, we can go small, so we have a lot of options there, so that's nice to have.”

Last year, due to injuries and talent, NU’s only real option was to go small. Often times the Wildcats played just seven players all game and were forced to put lanky 6-9 forward John Shurna at center. It worked when shots were falling, but NU struggled mightily on the boards and in closing out games.

"Last year we had six or seven players that could play and that was a problem because everyone was staying out of foul trouble; everybody was tired,” Cerina said. “So definitely, now, when we have 15 players it's going to be easier. We have size, we have two 7-footers (and) we have a lot of good guys that are pretty athletic, so we should be real improved (inside).”

While NU will still shoot a lot of threes — Carmody said it’s a “no-brainer” that every team should shoot them — the Cats won’t have to live and die from downtown, thanks to the newfound depth in the frontcourt. This time, if NU does shoot threes, it will be because that’s the best shot available, not the only option.

“We had probably the best guy in the country at it last year so I'm sure we won't shoot as well or shoot as many, but we'll still try to take advantage of that,” Carmody said. “Sometimes if you have an inside presence you shoot a lot more because people are doubling you.”

However, just because the pieces are in place, success isn’t necessarily a “given” for the Wildcats. Swopshire is still trying to adjust to a new system, while Cerina is still working on his shot. Olah has never played in college and Carmody said he is “looking pretty good right now,” but “my concern is from the top of the kep to the top of the key. We’ve got to get him to run all the time.”

But those issues are teachable and can easily be resolved in practice by the time the season starts. Last year’s issues — depth, size and talent — weren’t teachable.

For the first time in a while, the talent is a “given” for the Cats. And the many new faces have brought a newfound optimism and much higher potential to the program.