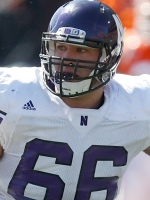 You know the college football season isn’t too far away when preseason award watch lists begin their annual two-and-a-half-week-ish release period in early July. They’re pretty meaningless at their release dates because, well, there’s a whole season to be played before anyone can definitively pass judgment on who indeed is the nation’s best quarterback, or running back, or wide receiver and on down the line.

Yesterday, the preseason candidates for the Rimington award, given annually to the nation’s best center, were released, and Northwestern’s Brandon Vitabile was one of the names on the list. Vitabile joins James Ferentz (Iowa), Will Matte (Indiana), Graham Pocic (Illinois), Matt Stankiewitch (Penn State) and Travis Frederick (Wisconsin) in representing the Big Ten on the preseason list and he’s one of only eight sophomores to be recognized. Here’s the full list.

With NU being shut out in numerous other preseason award watch lists—Maxwell (most outstanding player), Bednarik (best defensive player), Mackey (best tight end), Groza (best kicker), Guy (best punter)—it’s nice to see the Wildcats plant their flag in the preseason college football national award landscape, if such a place exists. Vitabile, who in preseason camp unseated three-year starter Benn Burkett, came through in a huge way for the Wildcats last season. He earned a well-deserved first-start against Boston College and maintained his grip on the position throughout the season. The constantly shuffling quarterback dynamic stunted Vitabile’s development, but he emerged as one of the line’s best and most consistent players by season’s end.

It’s no small feat to be named a candidate for this prestigious award as a sophomore, and Vitabile is truly deserving of the honor. He was a pleasant surprise for last season’s shaky line, and he should only improve during the next three years. Centers are often required to tweak blocking schemes and identify blitz packages at the line of scrimmage, responsibilities that require a countless hours of film study and preparation. Vitabile, a redshirt freshman playing his first season of college football, handled those assignments with the assured poise of a three-year veteran.

As coach Fitzgerald and staff continue to reign in top offensive line talent on the recruiting trail, they can take comfort in having Vitabile as a baseline, a reliable component to build around in the coming years. Winning this award is as much about national exposure as it is actual performance—the Rimington selection committee won’t spend it’s time breaking down film for all 51 candidates—so if the Wildcats aren’t in contention for a top-tier bowl game, Vitabile’s chances are slim. But its nonetheless impressive to see his name on the list, distinguished along side the nation’s best players at his position. With so much growth, maturation and development to do over the next three years, it’s a safe bet that this won’t be the last time he's in contention for the honor.