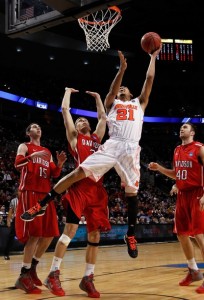 It seems everything about the 2012-2013 Northwestern basketball team is new right now. A new attitude, a new direction and plenty of new players.

That can certainly be a good thing for a program that has been on the verge of making its first NCAA Tournament for quite some time, but it also provides challenges, namely getting everyone to gel by the time the season starts in November.

However, thanks to a new NCAA rule that allows coaches to practice with their players for two hours a week during the summer, the Wildcats are getting a jumpstart on integrating their new players.

“It's only two hours a week, but it's especially useful when you have a lot of young guys or new guys,” coach Bill Carmody said. “It's great so that if you can get some things done now, when September rolls around they won't be behind and they can just compete on how good the are instead of (having) someone beat them out because they know stuff and the other guy doesn't know it. So it's really just teaching and sort of learning the system a little bit so when September rolls around they can just play.”

Just how “new” is this roster? The frontcourt, especially, has gone through a major makeover. The Cats have two freshmen centers entering this year in 7-2 Chier Ajou — he still needs to be cleared to practice by the NCAA — and 7-0 Alex Olah. Forward Jared Swopshire transferred to NU after four years at Louisville, while forward Nikola Cerina will be seeing his first action in a Wildcats uniform after sitting out a year following his transfer from TCU. Additionally, freshmen Sanjay Lumpkin and Kale Abrahamson could contribute, as could redshirt freshman Mike Turner.

That’s a lot of new faces and a lot of teaching. Luckily for Carmody, the new rule provides a crutch that he wouldn’t have had in the future.

“It's great,” Swopshire said of the rule. “It's perfect timing, too, since I only have a year left.”

Swopshire is in a unique position as a newcomer, since he still has to learn the system, but also has a lot of experience since he’s a fifth-year player who just came from a Final Four team.

“It's been an adjustment coming from a different system and coming in here as a new guy, kind of like a freshman almost, but expected to be a leader, but I'm more than ready to do it,” he said.

Carmody said Swopshire’s experience has helped ease the learning curve. That, in addition to the new practice rule, should help him be ready by the time November rolls around.

“He is a pretty good all-around player,” Carmody said. “He can dribble the ball, he can pass the ball, he competes. He wants to be good. I think that playing for a coach at Louisville, (Rick) Pitino, he's well-schooled and he's played at the highest level. He was a Final Four guy last year, so he brings maturity to us.”

Swopshire will lead the frontcourt along with Drew Crawford, a senior forward who will have all new faces playing around him come November. While it has been an adjustment working with the new players, he said the new practice rule has been a major help for the team as everyone tries to get comfortable with each other.

“Before this all the freshmen, like when Alex (Marcotullio) and I and Reggie (Hearn) were here, we had to learn the offense only a couple weeks before the season started,” he said. “Now we've got an extra couple months to get guys on board, get guys used to running our offense, because it's difficult to learn and it really helps to have these extra weeks. The guys are doing well.”

It’s always tough for teams to transition between seasons, especially when they have this many new faces. While it’s a challenge, it’s one that NU will get a head start on, thanks to the new NCAA rules.

And who says a challenge can’t be enjoyable?

“It's a lot of fun,” Crawford said. “We've got a lot of new guys, a lot of talented guys and guys who are willing to work hard, so it really is good to get on the court with them and work hard together. We've got a lot to look forward to this year.”