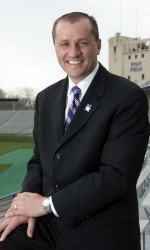 One of the keys to running a successful athletic program is having strong, willful decision makers in positions of authority. The trickle down effects from the choices made at the highest levels of leadership largely dictate the direction and purpose of the program's basic infrastructure, and to ensure those choices are in line with the University's core principles and values, the athletic department's chief representative must be chosen with every confidence that the program will succeed under his/her leadership.  Northwestern knew this full well when it hired Jim Phillips as its athletic director in 2008, and so far, the decision has paid off in a big way. For four years, NU’s athletic department has thrived under the reign of Phillips, who has proven himself to be just the right sort of visionary leader to guide NU’s athletic program towards greater competitive success while maintaining its rigorous academic standards. Phillips, now in his fifth year as NU’s AD, has improved the Wildcats’ athletic program on several fronts and appears to have established a positive culture of success—on the field, in the class room and from a marketing standpoint—since he inherited the position. His presence within the department has undoubtedly benefited NU and the surrounding community, and he was recognized for his excellence this year with the 2011-2012 Under Armour Central Region AD of the year award.

Apparently, NU fans, students and alumni weren’t the only folks paying attention to what Phillips accomplished during his time in Evanston. Successful college coaches and assistants are often coveted by other program for their winning ways, but it’s rare that you see ADs, particularly well-established ones at power conference schools, being courted by similar institutions. And if you do, it sure seems like it doesn’t happen nearly as often. But that’s exactly what Teddy Greenstein of the Chicago Tribune brought to light today, reporting that Stanford University made a push to convince Phillips to leave NU in favor of taking the same position in Palo Alto.

“Stanford University targeted Northwestern’s Jim Phillips for its vacancy at athletic director, telling him he is the school’s top choice. But Phillips told an executive at the firm conducting the search that he is not interested in the job, sources told the Tribune.”

It only makes sense that Stanford, who’s looking for someone to fill the post deserted by new Big 12 commissioner Bob Bowlsby, would go after someone with a proven track record of success at an institution with similar academic and athletic goals. The tw0 schools clearly see eye-to-eye when it comes to weighing the delicate balance between academic rigor and competitive advantage, so it was no surprise when a substantial scheduling partnership emerged out of their common understanding at a time when other Big Ten schools were unable to secure such a deal with other Pac-12 programs. Phillips has overseen a program-wide surge in competitive success while continuing to emphasize academic progress in a unique way that Stanford, naturally, has found impossible to ignore. The attempted coup is as much a compliment to the positive framework Phillips has implemented as it is an evident plea for a strong leader capable of navigating the Cardinal to greater levels of success and achievement. Phillips has spun NU’s academic rigor as a positive factor in the program’s on-field success, rather than falling back on its recruiting struggles as an excuse for substandard performance against other Big Ten programs with lower academic standards. Stanford strives to offer the same package of academic prestige and competitive success, while fighting against the same academic limitations in its recruiting efforts, and it clearly appreciates the way Phillips has worked toward this end during his time at NU.

In the end, Phillips’ Chicago ties—he grew up on the North Side—likely influenced his decision, along with his prosperous four-year history at NU. He clearly has the program moving in the right direction, and he's in a position to sustain that success as he continues to gain respect and support from administration and alumni. While Phillips continues to chart a path of progress for NU, it’s fair to wonder whether other programs will come calling his way. Not only will coach Fitzgerald continue to surface as a prime candidate for vacant head coaching jobs at brand-name programs around the country, but perhaps Phillips will assume a similar position, just on a higher peg of the authoritative totem pole. For now, the NU community can rejoice in Phillips continuing his fruitful existence at the top of the school’s athletic food chain.