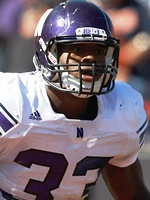 Last year’s award went to Boston College’s Luke Kuechly, a first-round draft pick of the Carolina Panthers. Semifinalists will be revealed on Oct. 20, finalists Nov. 20 and the winner will be chosen by Dec. 4. Notre Dame’s Manti Te’o is the only returning finalist.

My first immediate takeaway from this list is the egregious omission of Mike Taylor. Wisconsin’s standout linebacker led the Big Ten last season with 150 tackles and certainly deserved a place on this list. It’s hard to argue that there are nine linebackers currently residing in the Big Ten more deserving of this nomination than Taylor is, and the selection committee may find itself in the uncomfortable position of having to name Taylor a semifinalist, or even a finalist, without including him in their preseason watch list.

For Nwabuisi, this will no doubt help his confidence going into his senior season. He’s coming off an impressive 2011 campaign in which he started 12 games, compiled 84 tackles and forced two fumbles. This year, as he joins Damien Proby, Colin Ellis and Chi Chi Ariguzo in leading what some are calling the best linebacking corps of Fitzgerald’s tenure, Nwabuisi should take another major step forward. A quick glance at Nwabuisi’s playing style reveals a smart, heady player whose game continues to improve each week. This season, he’ll likely start at outside linebacker, though he’s capable of moving to the middle. More important is his ability to lead, to set a precedent for success, both verbally and by example, in preseason camp and to ensure that the LBs and the defense more broadly begin the upcoming season not with a defeatist attitude, but with a confident and well-intentioned mindset  believing that games can indeed be won because of the defense, rather than in spite of it.

The importance of Nwabuisi’s role on this year’s defense can’t be understated, especially given the anticipated struggles in the secondary and the overall youthful flavor on that side of the ball. The linebackers, with established returning players like Nwabuisi and Proby, is the only defensive unit touting any measure of continuity, consistency and dependability. The defensive line has players returning—Brian Arnfelt, Quentin Williams, Tyler Scott—but there’s little doubt the linebackers are the defense’s strong point entering the upcoming season, as least as far as we can tell in July. Nwabuisi can help confirm those projections by guiding the unit’s preseason development and affecting its cohesion in a positive and productive way.

This nomination recognizes Nwabuisi’s talent and hard work, but it’s also a formal tip of the cap to NU’s talented linebacking corps, which clearly has teams, coaches and award selection committee members singing its praises. That may be a bit of a stretch, but with Nwabuisi claiming his place among the nation’s top 50 or so linebackers—ahead of Taylor, no less—it’s clear that NU’s talented group of LBs are commanding some degree of respect on a regional and national level.