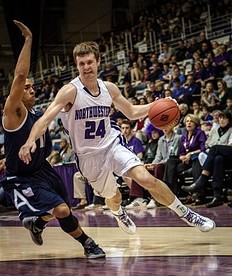 Shurna is struggling to find a groove in Summer League play.

The NBA summer league is used as a testing ground to examine the potential capabilities and pitfalls of rookies and other young players. It’s not an ideal playing environment, not with the underlying selfish attitude dominating the collective mindset of most every player. When John Shurna signed a summer league contract with the Atlanta Hawks, the hope was that he could prove in a limited five-game sample that the positive value derived from his three-point shooting is enough to outweigh his myriad weaknesses in other areas—athleticism, defense, finishing in traffic. Shurna is at his best when he’s coming off screens, catching and shooting, rather than creating his own shot off the dribble, a skill set well suited for any team in need of a pure knock-down shooter.

Just three games into Shurna’s summer league career, there’s really not much you can say to describe his performance. It’s not that he’s underperformed, or been exposed in any pronounced way. The problem isn’t anything obvious, and that—as weird as it sounds—may actually be part of the problem. Shurna, in three contests against the Washington Wizards (7/13), San Antonio Spurs (7/15) and Boston Celtics (7/16), has floundered amid the breakneck pace of summer league play without ever really influencing flow of the game. He’s not one to manufacture his own shot against the elite defenders he’s up against, and he’s not getting the open looks on the perimeter he needs to state his claim for an NBA roster spot. Shurna is practically worthless for NBA teams if he can’t make three-point shots, and at this early stage in his NBA competitive journey, he simply hasn’t been given ample opportunity to flaunt his magic from beyond the arc.

Here’s a look at the Atlanta portion of the box scores of Shurna’s three summer league contests (click to enlarge):

As you can see, Shurna numbers are downright ordinary. You can't draw too many conclusions from a boxscore, but Shurna hasn't provided any quantifiable measure of consistent and valuable contributions. In approximately 56 combined minutes played, Shurna went 3-of-13 from the field for 11 points, with six of those points coming via the three-point shot. He posted two assists and four rebounds, hardly significant metrics for a projected three-point specialist. While Shurna has struggled to impact the game, Atlanta’s first-round draft pick, John Jenkins, has commanded a large share of the offensive workload and launched 41 total shots, 11 of those coming from behind the three-point line. It’s hardly a surprise—Jenkins is a key component of Atlanta’s future plans, and summer league is the perfect setting for players of his ilk wishing to remove the training wheels and be the loose cannon they always wished they could be within the confines of restricted college offenses. Shurna falls at the other end of the spectrum, an undrafted player trying to prove he can carve out his own minor role at the next level, his future far from guaranteed.

Back in the halcyon days of NU basketball, Shurna had carte blanche to fire away at will. In this setting, open looks are treasured commodities, and everyone—players who, like Shurna, are fighting tooth and nail to prove they’re worthy of an NBA roster spot—wants their share of the pie. Two games remain for Shurna to flip the script, to dictate the game by his terms in a way that allows for plenty of three-point shots. If he continues down his current path of virtual nonexistence, Shurna’s NBA aspirations will remain exactly that: aspirations. He can still change course, but with the way his teammates are either a) playing strictly for their own benefit or b) deferring to and helping Jenkins, the odds are stacked against him.

Catch Shurna in his final two Summer League games on NBA TV as Atlanta takes on the Dallas Mavericks Wednesday at 8 p.m. and the Portland Trail Blazers Thursday at 6 p.m.