Leading up to the upcoming football season, Inside Northwestern will give you a brief profile of each of Northwestern’s opponents. During the season, you can expect a more in-depth preview of each game, including key matchups and more specific player analysis. This is simply a refresher for eager fans looking ahead to the fall. Look for this feature every Thursday. This week, we look at Indiana. Click here for last week’s edition. 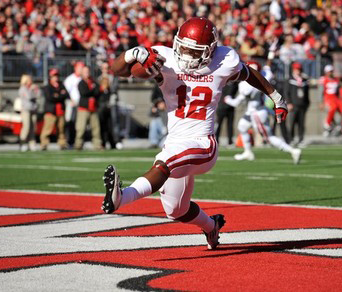 The Hoosiers ground attack will be led by Houston, who compiled 802 rushing yards last season.

If you’re a head coach at an FBS program in a power conference, winning one conference game in three consecutive seasons simply isn’t going to cut it, and that’s the harsh reality Indiana athletic director Fred Glass faced after the 2010 season, when the Hoosiers were coming off a 5-7 (1-7 Big Ten) campaign under Bill Lynch. Just three years after Lynch guided IU to its first bowl appearance in 14 years, Glass sent him packing and promptly began to seek his replacement.

Kevin Wilson had spent nine years as an offensive assistant at Oklahoma under Bob Stoops, five of those as offensive coordinator, and it wasn’t long before his named surfaced as a likely candidate for the head coaching vacancy at IU. Glass hired Wilson in December 2010 with the hope that the former Oklahoma offensive coordinator could jump start his program by installing the same type of no huddle, pass-heavy offense the Sooners have used to dominate the Big 12 of late.

The early returns on Glass’s coaching hire are not exactly encouraging. The Hoosiers, in Wilson’s first year as head coach, won just one game against FCS foe South Carolina State and lost all eight of their league contests for a dismal 1-11 overall record. Despite a four-game decline in wins from the previous year, there were signs near the end of the season that Wilson was beginning to turn things around. The Hoosiers fought hard in two of their final three games against Ohio State and Purdue, with the combined margin of defeat in those losses totaling just 22. Quarterback Tre Roberson, running back Stephen Houston and wide receiver Kofi Hughes served as fantastic complements within Wilson’s up-tempo scheme, which began to pay dividends towards the end of the season. And before you sour on Wilson’s year-one efforts in Bloomington, consider this: the Hoosiers played 32 true or redshirt freshmen last season. IU is no doubt one of the younger and more inexperienced outfits in the Big Ten, so their poor performance last season was not a huge surprise, given the coaching and scheme change.

When Wilson—who developed a reputation as a strong recruiter at Oklahoma—can run his scheme with his recruits, the Hoosiers, if the returns in any way resemble what Wilson unleashed on an annual basis at OU, have the potential to become one of the most explosive offenses in the Big Ten.

The offensive outburst may begin as early as this season. The Hoosiers return seven starters, including Roberson, Houston, Hughes and tight end Ted Bolser, and new offensive coordinator Seth Littrell, the mastermind behind Arizona’s high-flying passing attack that ranked third (370.8 ypg) nationally last season, is on board with Wilson’s pass-heavy scheme.

The ground game could be equally potent, as Matt Perez and transfer Isaiah Roundtree join Houston to form a talented and diverse running back corps. Couple that with Roberson’s mobility, and it’s clear the Hoosiers have the talent and depth to field a complex and balanced offensive attack. The offensive line was shaky at times last season, and the loss of tackle Andrew McDonald is a huge blow, but Roberson’s uncanny pocket awareness and mobility should mitigate their anticipated struggles.

For Wilson, last season was about laying a foundation, about developing a set of specific goals along with the framework and path needed to reach those goals. After a full year learning his system and embracing what he’s trying to instill, the offensive skill players—Roberson, Houston, Hughes—could be on the verge of breakout seasons.

Had the defense performed at a somewhat respectable level last season—the group finished last among Big Ten teams in scoring and total defense—the Hoosiers may have pulled out one or two conference wins. They will have to improve on the defensive end to secure Wilson’s first league win this season, no matter how many points Roberson and Co. produce on a weekly basis.

Spring practice offered the promise of an improved group, especially in the linebacking corps, where junior college transfers David Cooper and Jacarri Alexander should bolster the rotation’s overall strength and depth. Tackles Larry Black and Adam Replogle can plug holes and be disruptive at the line of scrimmage, though the line is still searching for a viable pass rush after recording just 18 sacks last season. Sophomore safety Mark Murphy delivered one of the more inspiring performances among true freshmen in the Big Ten, and he should only improve with more experience.

For the Hoosiers to make that next big step on defense, co-defensive coordinators Doug Mallory and Mike Ekeler need to revamp the system and instill a new mindset within his players with a focus on forgetting the past and moving forward with new goals and objectives.