Share All sharing options for: Most Important Player Rankings: No. 10, OT Patrick Ward

Believe it or not, the upcoming college football season is not too far off. Pretty soon, your Northwestern Wildcats will travel to Syracuse, New York, for a season-opening tussle with the upset-minded Orange. To get you ready, and to ensure we don’t get too bored in the meantime, we’re putting together a list of the Wildcats’ 10 most important players in 2012. Over the next 10 days, we’ll reveal one player on our list per day, starting with No. 10, the least important on the group, and on down the line to No. 1, our MIP (most important player).

These rankings are arbitrarily constructed, and each pick may not have any quantifiable or logical justification for its placement in the list. In other words, these 10 players can be shuffled around in a number of ways, and it’s hard to find fault with any arrangement. There's also a number of different players we could have included, and several others that could have been omitted. Our logic may not be intelligent, practical or defendable in your opinion, but that’s exactly the point of this completely just-for-fun exercise: it really doesn’t count for anything other than your amusement.

We kick off our MOP rankings with No. 10: OT Patrick Ward 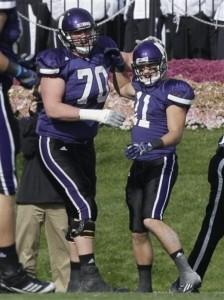 Last year, a Northwestern line filled with veterans was somewhat of a disappointment after getting fairly high expectations. Of course, maybe it was the fault of anyone who had high expectations to confuse veteran-laden with talent-laden. Still that group should have been better, as it included Al Netter and Ben Burkett in addition to Ward.NU lost running back Mike Trumpy in the early going and the offensive line was tasked with protecting Dan Persa when he came back from injury, so its struggles affected the entire offense. The Wildcats couldn't get a solid running game going in between the tackles and most of the yards the got on the ground came outside of the tackle box.This year, with a young quarterback to protect, the line needs to be much better than it was in 2011 — though having a quarterback who can move certainly helps. Treyvon Green, Trumpy and co. will rely on the line to open up holes that weren't there last year, and after a rough showing at spring practice, the line showed there is still plenty of room for improvement.

Ward will be the leader of a young, but promising, offensive line, switching over to left tackle after filling the right tackle position a year ago. Left tackle is one of the most important positions in football because it protects a right-handed quarterback's blind side, and since Colter will just be learning, he will need as much time as he can get to throw.

Ward certainly can't change things around on his own, as young guys like Jack Konopka must step up, as well as veterans like Brian Mulroe and Brandon Vitabile. However, Ward has the most game experience of the group and is on arguably the line's most important position. In order for the line to take the next step toward getting better this season, Ward must be a leader in that process.