Share All sharing options for: Most Important Player Rankings: No. 9, LB David Nwabuisi

Today, we move on to No. 9: LB David Nwabuisi 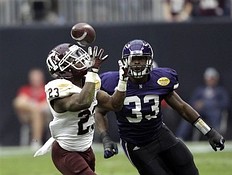 The linebacking corps needs a strong season from Nwabuisi in his final season with the Wildcats (Photo courtesy AP Photo).

With so much uncertainty on the defensive side of the ball this season, the linebackers stand out as a reliable and experienced group capable of atoning for the severe vulnerabilities both along the line and in the secondary. Nwabuisi is the unquestioned leader in the linebacking corps, and perhaps the entire defense altogether. Without Nwabuisi setting an example for his peers and providing a stern voice of maturity for the younger players, the defense will lack the backbone and savvy it needs counter Big Ten offenses this season. Players like Colin Ellis and Chi-Chi Ariguzo, both of whom are expected to take on starter’s workloads at outside linebacker this season, need Nwabuisi to assist their development process and guide them down a path of success.

Beyond the intangible qualities he provides, the indefinite yet hugely important ways in which Nwabuisi impacts the defense both on and off the field, it warrants mentioning that he’s one of the best linebackers in the Big Ten and was recently recognized as such with his inclusion in the preseason watch list for the Butkus Award, given annually to the nation’s best linebacker. While his ability to run down ball carriers may be the most obvious asset he provides on the field, Nwabuisi is an excellent pass defender, with the speed and agility to matchup with tight ends and slot receivers. That skill will be instrumental in the Wildcats’ pass defense efforts this season, given the lack of depth and experience within the secondary. Nwabuisi, at 6-1, 240 pounds, is one of the best skills-to-size players at his position, and his versatility allows him to roam the field and make plays both at the line of scrimmage and in the defensive backfield.

After playing a reserve role in 2010, Nwabuisi started 12 games last season, mostly at outside linebacker. It wasn’t long before he proved himself as one of the most indispensable players on last year’s defense. Nwabuisi ranked third on the team with 84 tackles and was named the defensive player of the week for his efforts—nine tackles, two tackles for loss, one forced fumble, one pass breakup—in the upset win at Nebraska.

After a full-season at OLB, his performance should improve this season, and his running mates—Damien Proby, Ellis and Ariguzo—will follow his lead. If Nwabuisi regresses in any significant way this year, the linebacking corps, widely regarded as the best in coach Fitzgerald’s tenure, will fall well short of its lofty preseason expectations. Nwabuisi is the Wildcats’ defensive field general, and a dynamic playmaker in his own right, with designs on rectifying NU’s defensive woes and setting a strong precedent for success.