Share All sharing options for: John Shurna Summer League Wrap-up: summing up his five-game stint with the Atlanta Hawks 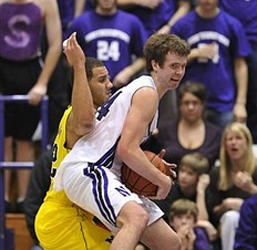 Now that John Shurna has played his final Summer League game in 2012, the next order of business is wrapping up his performance and recapping all that he did or didn’t accomplish in Las Vegas. Last week, I gave you an update on his progress, and through three games Shurna had failed to establish any semblance of offensive rhythm or show off the three-point shooting that made him so successful at Northwestern. In 56 combined minutes, he scored only 11 points on 3-of-13 shooting. His playing time was cut to just 10:49 in Atlanta’s third game against the Boston Celtics, perhaps a sign of his diminishing returns on the floor.

In the two games since that matchup with the Celtics, Shurna’s performance hasn’t changed much at all. He played nearly nine minutes against the Dallas Mavericks and scored three points on 1-of-2 shooting, his only made field goal a three-point shot. In his final game, against the Portland Trail Blazers, Shurna made one of two three-point shot attempts and two of four total shot attempts in roughly 13 minutes for five points.

Here are the Atlanta portions of the two box scores from Shurna’s final two games (click to enlarge):

In the wake of Shurna’s five-game summer league go-round, the chances of an NBA camp invite, far as I can tell, are not favorable. Not only did Shurna’s athleticism and defense prove insufficient—as most expected—but he never imposed his unique offensive game on the opposition, more often settling for conservative passes than jump shots. He looked tentative, lost, even detached from the offensive system being played through and around him, almost as if he knew the isolation-heavy sets being run were ill-suited to his unique offensive skill set. Shurna appeared uncomfortable in an unfamiliar offense, and his level of performance suffered as a result.

As a three-point shooting specialist, Shurna’s effectiveness could only be maximized in an offense featuring plenty of willing passers, and the Atlanta Hawks don’t come close to fitting that description. Besides feeding first-round pick John Jenkins—who developed a reputation as college hoops’ best three-point marksman while at Vanderbilt—the Hawks ran a penetration-based dribble-drive offense that left little room for Shurna to camp out on the perimeter and wait for open looks. The only way to get involved in that sort of system, one more similar to a conventional NBA offense than the Princeton system Shurna ran with the Wildcats, is by either creating your own shot or working off screens out on the perimeter. Shurna proved remarkably efficient at the latter maneuver while at NU, and there are plenty of NBA players—guys like Kyle Korver (Atlanta Hawks), Steve Novak (New York Knicks), Matt Bonner (Spurs)—who operate almost exclusively this way with their respective teams.

The problem lies in the Summer League environment, and the individualistic end-game it fosters. Players have five games to impress NBA scouts and earn an invitation to an NBA minicamp tryout. This is their sole guiding principle, to do what’s best for themselves, a mindset that more often than not minimalizes what other players can accomplish. Most of these guys are thrilled about wearing an NBA jersey in the first place, even if it’s only for a week. The only way to extend that positive sentiment is by proving that you actually belong on an NBA court, in an NBA jersey, playing against NBA athletes in real NBA games. Shurna is not a self-serving player. He operates best when he’s out on the perimeter, coming off screens and knocking down jump shots. He doesn’t fit the me-first playing style that defines the summer league.

Going forward, Shurna and his agent likely will negotiate with several teams. He could end up overseas, where his high basketball IQ and experience in the Princeton will benefit him greatly. Or he could opt for the D-League, which is a more plausible route to the NBA but features a brand of basketball that resembles the individualistic style of the summer league. Whether he ends up in Europe or stays in the US, a professional team will find a way to put his talents to good use. Shurna is a skilled player, and even if some of his physical characteristics aren’t well-suited to the prototypical NBA mold, his best and most lethal weapon—the three-point shot—is a highly valued commodity that elevates any offense.

If Shurna can improve on defense, enhance his physical strength and continue to light it up from beyond the arc, he may find himself on an NBA roster in the future.  With the way the three-point shot has increasingly become a staple of most NBA offenses in recent years, shooters are and will continue to be in high demand. While perimeter play flourishes—going small in the NBA is the new in vogue offensive tactic—and post play diminishes, there will be a greater need for proficient shooters, guys like Shurna. There may be a few-years waiting period before Shurna’s NBA aspirations become reality, or he may never make it at all. But to write off his chances after a poor summer league performance is nearsighted and impractical. The League isn’t going away. Shurna, over the next few years, can direct his attention toward gettimg himself there with hard work, both physical and mental, and a sustainable long-term approach to improving in areas that held him back during this year’s summer league slate.