Share All sharing options for: Most Important Player Rankings: No. 8, DE Tyler Scott

Next we move on to No. 8: DE Tyler Scott 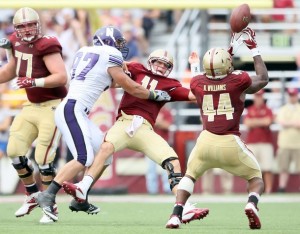 Tyler Scott will be called upon to improve NU's pass rush in 2012. (Photo courtesy Elsa/Getty Images)

Throughout spring practice, the theme was the same for Northwestern's entire defensive line: the Wildcats need more of a pass rush. NU had just 17 sacks last season, putting it in a tie for No. 95 in the country, and because the Cats were able to put very little pressure on the quarterback, opposing offense had more time to direct a weak NU secondary. Those weaknesses led to a weak defensive performance overall in 2011, when the Cats gave up 27.7 points per game — No. 66 in the country in that category.

The key to improving the pass rush falls on the ends, particularly starters Quentin Williams and Tyler Scott. Both are returning starters, as Scott broke out last year as a sophomore, starting in six games. He missed two games due to a shoulder injury, but had 31 tackles and three fumble recoveries. This year, his role is expected to increase.

Though last year's defensive line was a disappointment, prospects for this unit are looking up. It had an outstanding spring and dominated the offensive line throughout much of spring practice and the spring game — we'll see which of the two units that says more about when the season comes — without the help of Williams. Newcomer Deonte Gibson stole the show and will likely be a major contributor for NU this year, but Scott will be the starter and looked very good, as well. Now the key is replicating that April performance in September.

Scott is important, not so much depth-wise — Gibson is a perfectly capable backup — but in that the defensive line must be good to make up for the weak secondary. The Big Ten doesn't have great passers this year, so if Scott can get them into pressure and force them into mistakes, the entire defense will benefit. However, the conference is filled with good running quarterbacks, so it will also be Scott's job to not let them escape outside the tackle box. Scott certainly has the talent to have an All-Big Ten season, and if he helps NU improve its pass rush the entire defense will improve because of it.