The Vegas Summer League is over, which is sad for degenerate basketball addicts and people with weird fetishes for obscure fringe NBA players. (Sadly, I fall into both categories.) Because you, too, are a degenerate, but for Northwestern sports and not those other things I just said, you're probably wondering how that went for Northwestern basketball's two most borderline adequate playerse in recent basketball memory. Well, wouldn't you know it, I can tell you!

Unfortunately, I'm going to make you click on the jump below, which is a big problem if your computer doesn't have a "mouse", which is a piece of computer hardware that allows you to use your cursor to "click" on certain items. For you guys, your internet experience ends here.

John Shurna: I had hopes for Johnny heading into Vegas, because I really did think he was a borderline NBA prospect who could make his presence felt in a few scrimmages against good competition. Didn't quite turn out that way: The SummerHawks gave Shurna a starting spot going into the week, and he played over 20 minutes in each of his first two games. However, he shot poorly - 1-for-5 against the SummerWizards, 2-for-8 against the SummerSpurs - and quickly found himself out of playing time, not seeing more than 13 minutes for the rest of his time there. He proved he could shoot the three - 41.7 percent on the week - but only made one non-three point shot and didn't put up more than six points in any game, and in the gams I watched looked shaky on defense and got blocked a few times shooting the three, which was a concern I thought he would prove to be false. Not a great performance, and considering the Hawks added Kyle Korver and drafted a strong shooter in John Jenkins from Vandy, he probably wasn't showing himself off to the right team anyway. I hope he catches on a training camp roster, but most likely it's off to Europe - I don't see him wanting to try the D-League route.

Juice Thompson: Juice had almost the opposite experience, which is nice! In his first game, he got a DNP-CD, finding himself alongside former DePaul player Mac Koshwal as players the SummerHornets didn't even see fit to find court time in a Summer League game. He followed that up by going 0-for-3 in five minutes of court time, jacking up two unsuccessful threes in a very impressive display of wanting to shoot. But his coaches gave him 19 and 24 minutes respectively in his last two games, scoring nine points against the SummerMavs. Thompson isn't going to make it onto a roster, but nice to see him at least get some run after riding bench at first. Perhaps the initial lack of playing time was due to him not being a 6-foot-10 center.

So, neither guy is going to the league, unless Shurna vastly improves or shows a team his 3-point shooting is worth his deficiencies. For people - like me! - who see very talented Northwestern players and think "man, NBA scouts are dumb for not thinking these guys belong on a roster", things like summer league often serve as a wake-up call: these guys play on a court with a lot of other fringe NBA players and are far from impact players when the talent level of everyone aroud them are the same. I still think a team could use Shurna as a shooter, but three's a lot of other very good basketball players in the world, and he'd have to get lucky or really stand out to someone to make it to the league. However, having to play professional basketball in Europe ain't too bad, and it looks like these guys will be able to do that for some time.

Also, @NUMensBball tweeted this photo, which is gold: 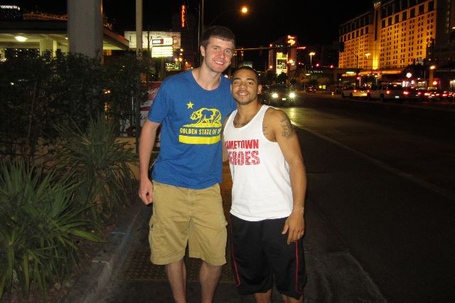 Apparently, for a night in Vegas, Shurna rocks gear from SB Nation's Golden State blog, Golden State of Mind, while Juice rolls in a tank. Good to know!