Share All sharing options for: Most Important Player Rankings: No. 7, WR Kyle Prater 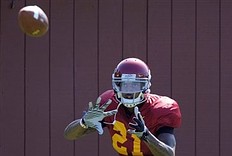 If Kyle Prater is granted eligibility this season, he can be an offensive force for the Wildcats (Photo courtesy Mark J. Terrill/AP Photo)

Before getting into what Kyle Prater can do for this team on the field, I feel obliged to at least mention the distinct probability that he may not play this season. After all, the NCAA still hasn’t reached a decision on his transfer hardship waiver request. Until the organization renders a positive verdict on his case, Prater’s potential impact must be discussed with the one huge caveat that his season may be derailed before it even begins. Should he be allowed to play—the likely scenario given the NCAA’s liberal interpretation of hardship waiver appeals of late—Prater gives Northwestern something it hasn’t had in quite some time: a big, long super-fast deep threat.

Even without Prater, NU’s boasts arguably the best receiving corps in the Big Ten. Demetrius Fields and Rashad Lawrence provide experience, while Cameron Dickerson, Christian Jones and Tony Jones are intriguing young talents ready to establish themselves as reliable options in the passing game. Each player offers a unique set of skills, and offensive coordinator Mick McCall will harness that versatility in the most effective and productive way possible. All of which sounds impressive, particularly for an offense expected to rely heavily on the pass this season. Prater, all 6-5, 215 pounds of him, is a game changer, the type of transcendent talent capable of taking the Wildcats’ passing game to another level and elevating his teammates’ performance.

The most obvious benefit is his size. Quarterback Kain Colter, though extremely mobile, has struggled making accurate throws on a consistent basis. He regularly misses and/or overthrows receivers, tendencies that could severely hamper NU’s passing attack in 2012. Prater provides the sort of big, reliable target that affords Colter plenty of wiggle room on misfires. He offers an excellent first option on plays across the middle, near the sidelines and deep down the field, three crucial areas where well-timed completions lead to big plays and touchdowns.

It’s unclear whether Prater, after a slate of spring practices, can be productive right away. But his presence alone—as a distractive, cant-ignore big-play threat—will do wonders for the other receivers. Wherever Prater goes, defenses will be forced to use one, maybe two defenders to shut him down, which opens up space for guys like Dickerson and Fields to exploit. If Colter has clear throwing lanes and uncovered receivers to aim at, the chance of him overthrowing or misfiring decreases significantly, and the passing attack will flourish as a result. So even if Prater can’t take the Big Ten by storm with his five-star talent and NFL physique, the threat he poses will facilitate the coterie of skilled receivers around him. Now it’s up to the NCAA to decide his fate.